In the Winter 2021 issue 35 of PLY magazine, I have an article called, A Mitt is a Swatch. Here are some photographs that support my article, in particular the pieces that didn’t make the cut.

Starting with blending board experiments, I made these rolags. I made two blending boards, trying to make them the same so once spun up, I could have about 70 grams of yarn. 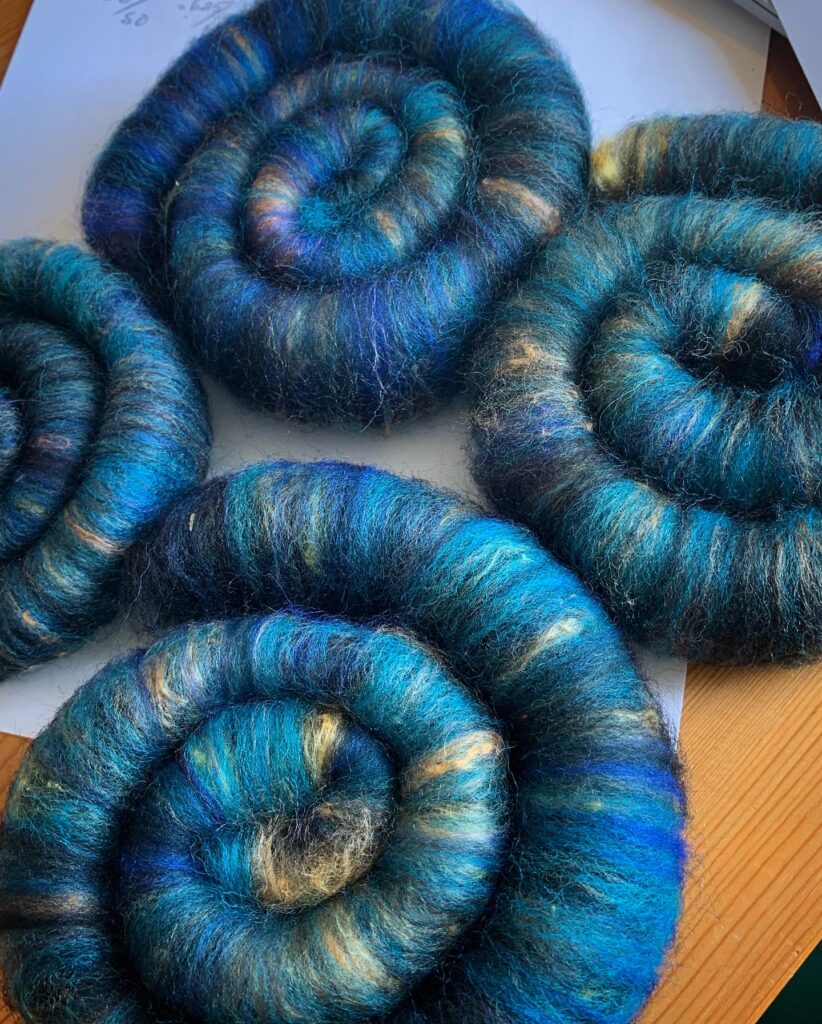 And here it is in spinning progress. Singles spun on my Ashford Joy. 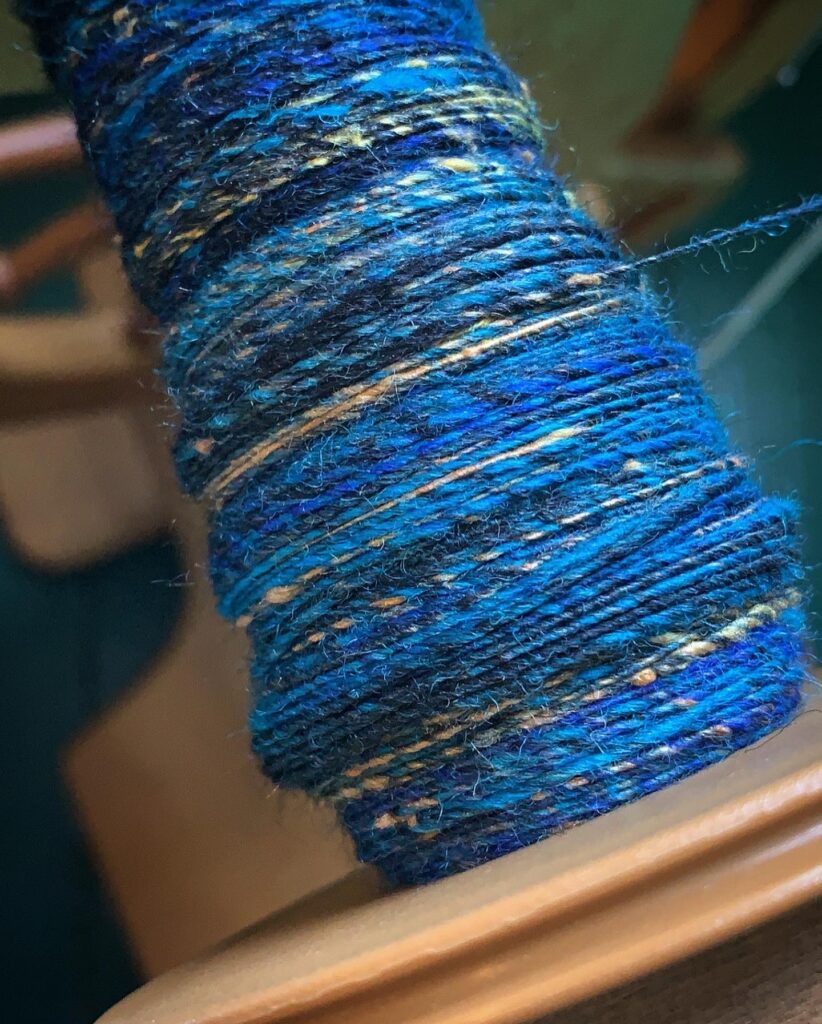 I made a two-ply yarn and then knit it into a wee swatch to see it better. Yes, I like this. 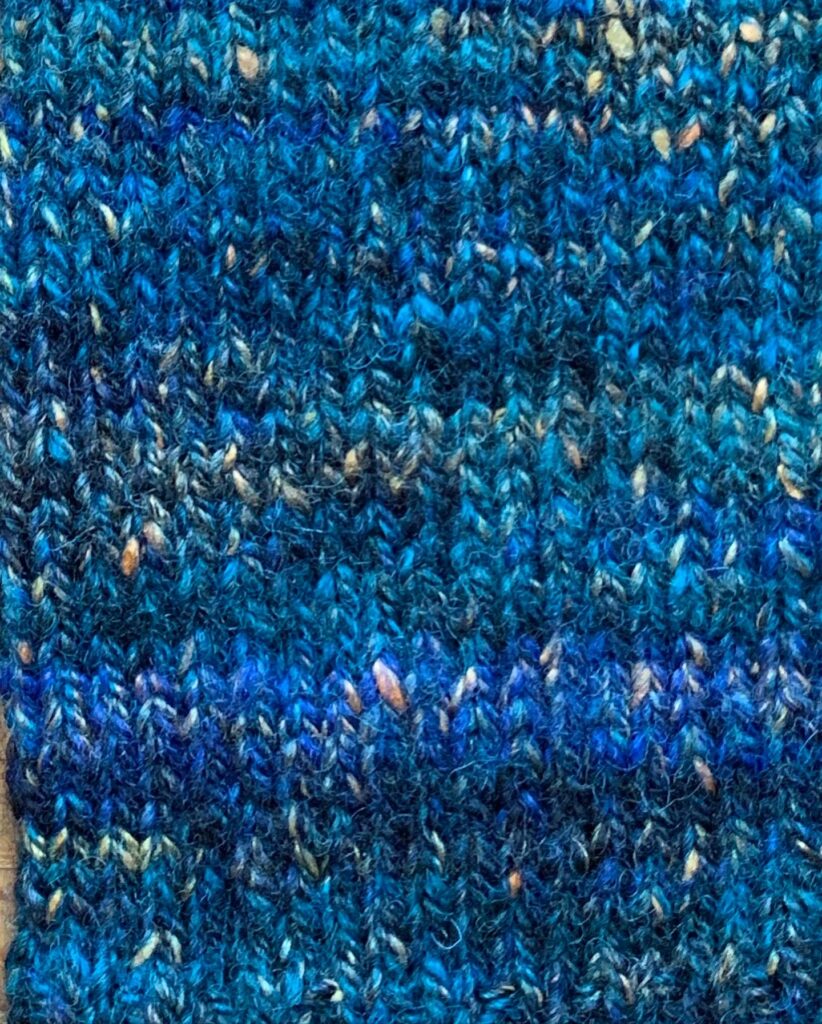 And here’s the mitt, with a bit of leftover rolag so I could show what it’s made up of; some leftover yarn, and the first small swatch. I call it a quick mitt because I didn’t include the thumbs – which take an additional 30 – 40 minutes to make (including having to weave in four extra ends.) 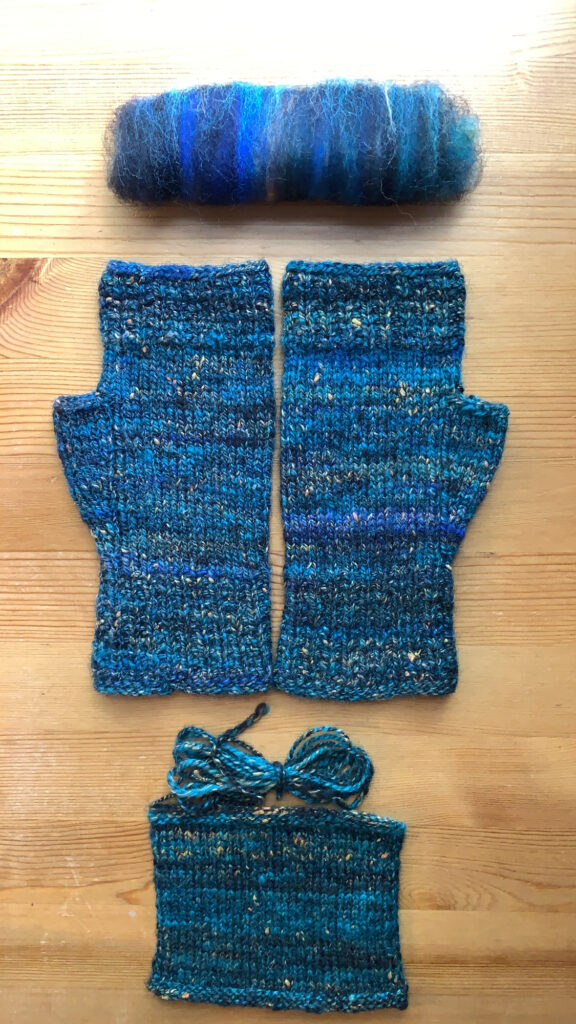 The mitt shows me much better what the yarn looks like; will eventually show me how the yarn will perform; and finally gives me a functional and beautiful (if I don’t mind saying so myself) object.

A mitten is a swatch – to read the entire article get a copy of PLY Magazine Winter 2021 Issue #35 (the Head and Hands Issue). It’s worth it.

One of the things I like to do when I am spinning on spindles, is to select a bunch of them to explore. I have a strong desire to learn as much about support spindles as I can, and my spinning time is limited. At this stage of my spinning journey with these new (to me) tools, I am not overly fussy about the yarn, so I will happily combine support and suspended spindles into my explorations.

In the photo below, there are three cross-piece (suspended) spindles AKA Turkish spindles along the top; and in the next row a suspended spindle by Eric Stapleton; and support spindles by Texas Jeans, CreativeJayne (the next two); can’t remember the maker of the dark wood Phang; and the last one is by Carry Cherry. The last four spindles I purchased online, only viewing photos and hoping for the best. These did not disappoint. They are a variety of weights and shapes. I move from one spindle to the next as determined by my attention span, temperament, and interest in the task at hand.

The fibre I’m spinning is mostly wool with some silk/yak made into rolags on my blending board.

I will spin on one spindle for a day or so, and then switch to another one. And so on. Doing this allows me to compare the spindles, the amount of energy it takes to get the spindle into motion, the amount of time it holds a spin (or doesn’t); and how the weight feels and affects my hands. When my hands, mostly my right thumb, gets sore, I stop. I take a break, wash the dishes – warm water helps soothe the sore muscle. And then a few hours or days later depending on how sore my thumb is, I start again with a different spindle.

With each spindle I am learning new things; new strategies for winding a cop or turtle; new techniques for keeping the spindle in motion; and with the support spindles, I am also exploring the different styles and materials used in the spinning bowls. It really is a rabbit hole of things to explore; spindles, fibre preps, spinning bowls, and then of course, techniques. 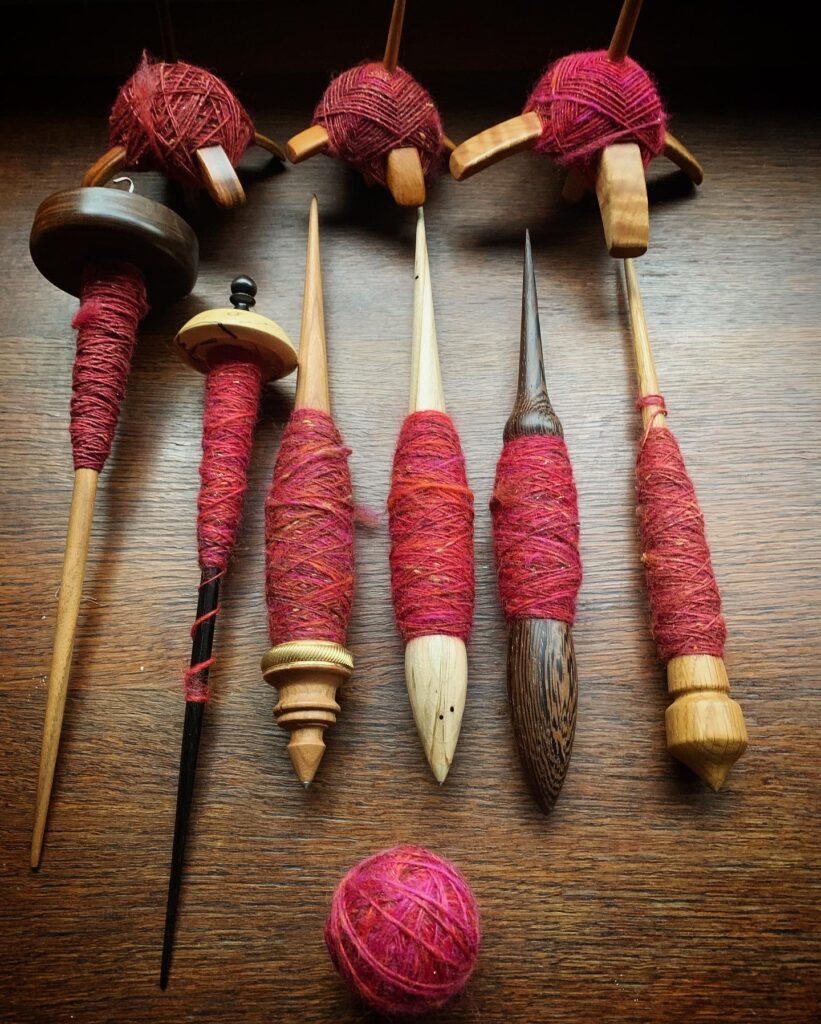 In the photo below I show (all but cross-piece) spindles without the yarn on them, so you can see their shape. I wouldn’t say that each spindle was full – but they were mostly full enough for me. As you make and store the yarn onto your spindle, it adds weight to the spindle. The process of winding the newly spun yarn onto the spindle is called building your cop. The cop is the name of the stored yarn. Even that part of the process takes skill and decision making.

So with each spindle I’m learning, reflecting, and mostly enjoying the process of making yarn with a stick. Working with several at a time gives me a chance to do instant comparisons and over time, I’ve learned what my favourite shapes, weights, and lengths are.

More to come about that. 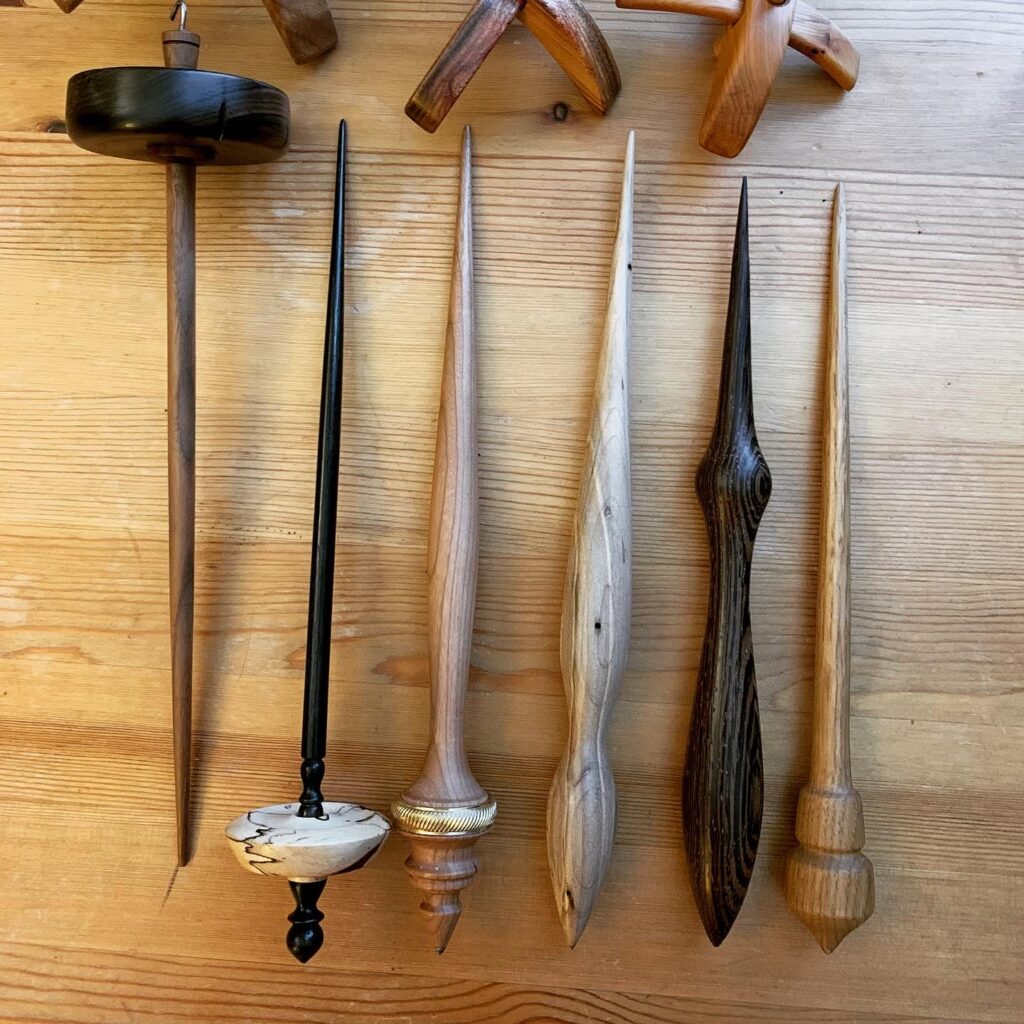 Like many people, my world dramatically shifted on March 16, 2020. That’s when my work went 100% remote and distanced. All the fibre workshops that I had lined up to teach and fibre festivals I had planned to attend were quickly cancelled. People were getting sick – and our medical experts and scientists were just learning about the COVID-19 virus.

I learned early on that I needed to keep my overly busy brain and restless hands occupied on a task, or a series of tasks. One of the first tasks I fell into was to learn about support spindles and learn how to make yarn with them.

I’ve been a spinner since 2000 – and am confident and proficient making yarn with suspended spindles and on wheels. But spinning with support spindles had eluded me. I owned a few and had even taken a three-day workshop with Caroline Somerfeld on Spinning Exotic Fibres with Russian Spindles. But nothing stuck. So I started right from the beginning and treated myself with all the encouragement and support that I would give a new spindle spinner.

Even before that stage, I needed some support spindles. Where do you start? What size and shape and weight? What kind is best? [spoiler alert – there is no BEST spindle style] So I purchased some based simply on their shape. I love spindles that look like sticks or wands. It added to the mystique of using such a simple tool to make yarn.

In the photo below, from left to right: Tabechek Russian style spindle 35g (already owned – from the workshop mentioned above); Phang 34g (purchsed online – can’t recall any details); last two are from the same US maker (28g and 30g). I didn’t know anything about size and shape or weight so I just dove in based entirely on the look of the spindle.

Around the same time, I started playing around a lot with my blending board – experimenting with fibre and colour blends. These fun rolags were just the thing that I chose to spin as part of my support spindle journey. Because of the different fibres and blends, it creates a textured yarn. It was easy to focus exclusively on getting sufficient twist into the yarn, and less focus on the consistency of it. For me, that made it easier to develop the skills of flicking, drafting, winding a temporary cop, and then winding a permanent one.

I have learned that building a cop on a Russian spindle is different from building it on other styles. Because the Russian style is a narrow stick, the newly spun yarn is wound around it with no whorl edge to build against. In my early support spindle days, I wound my cop in a horizontal manner (around and around). It took me a while to figure out that it was that kind of winding that was causing me to have hand pain when support spindle spinning.

The photo below is the newly plied yarn from those spindles above. It looks like there could be more ply twist in many parts of it. But the best test is what it looks like after it is washed.

And this is what it looks like washed, where the yarn blooms.  Next part of the experiment/learning is to assess the quality of this yarn. May aim is to spin yarn to make mitts. I need about 100 metres/ 50g for a pair of adult mitts.

And here are the mitts I knit with that first spindle spun yarn. And below it is a swatch so I could hopefully remember and replicate (aspects of) this yarn.