Thanks to the fine folks at Ravelry, the link to the pattern now works.  So please enjoy. 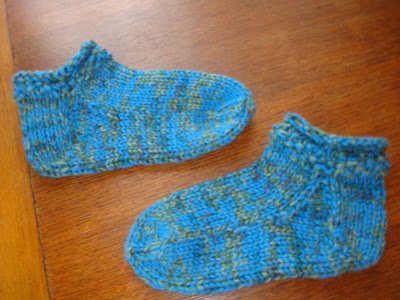 Here is an easy and straight forward pattern for a pair of bed socks. You knit them on size 5mm needles and use chunky yarn, so they knit up fast. If you don’t have chunky yarn, like used in the downloadable pattern – available below for FREE, you can use a couple of strands of DK or Worsted Weight  to bring it to a heavier weight.

The pair in the photo above were made from one strand of green Cascade – Quatro, a strand of blue Berroco Ultra Alpaca and one strand of dark blue Hand Maiden sock yarn. I ran out of the sock yarn near the toe, but it didn’t matter.

I am working on another pair.  In fact I started this pair earlier today. And while it am putting it down to make my tourtiere and do my last minute shopping [and doing a blog post] I am sure I will finish this pair tonight. 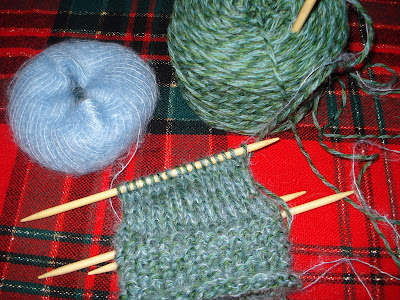 For this pair I am using a strand of the green Cascade Quatro from before and a strand of kid mohair and silk. I am amazed at how lovely the fabric is.

I hope you enjoy the pattern and better yet, I hope you make a pair for yourself and some loved ones.

The socks are done and on their way to Bangor, Maine.  I finished them on Thursday night, and they were in the mail Friday morning.  Here’s a shot of them in their beginning phase — on the flight to Winnipeg. 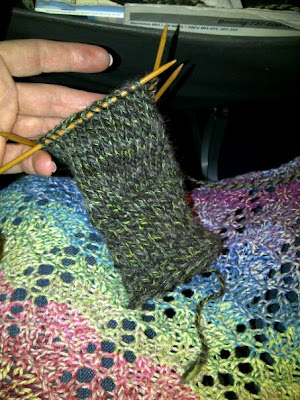 And here they are:  DONE. 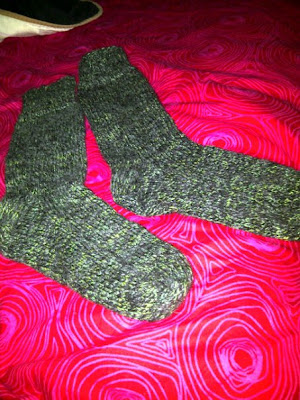 So I have these two skeins of  yarn and more to come. It’s pretty much what I hoped it would be like, but now the big question — what to do with this llama/alpaca/merino/silk yarn?  It’s going to be an extremely warm wearing item, whatever I knit with it.

It is between a sport and a sock weight yarn.

I decided to make a pair of socks for my Dad. He lives in Bangor, Maine which is a fairly cold place in the winter.  It’s a damp cold.

Last Sunday I had to fly to Winnipeg for work, so decided that the airport waits/lineups and hotel evening time would help me make a dent in this project.  In the line up for the re-scheduled departures, [because the morning flight out of Calgary was cancelled due to mechanical errors which threw the whole system out of whack,] I cast on 56 stitches for the socks.  After 1 1/2 inches of 1×1 rib, I knew these were going to be too big.  I was using 3mm needles, the same I reguarly use to make socks.  . . . this yarn was a wee bit thicker than the sock yarn I regularly use, I never thought it would make that much of a difference.  No matter.  I had a two hour wait ahead of me, so I headed through security, grabbed a table and a coffee and proceeded with my project.

I did a few quick [back and forth] rows of stockinette stitch and measured it up.  No wonder why 56 stitches were too huge.  I ripped it all out, and according to my calculations,  decided to cast on 48 stitches.

Start #2 – no matter and no problem – I had a two hour wait ahead of me, and not many distractions.  I was in the Abbotsford Airport.

Knitting a sock or knitting a mitten is kind of like knitting a swatch, so I often don’t stress about gauge and such.  All I’ve “wasted” so far is about 20 minutes of knitting.  That’s nothing, and it helped to pass the time.  In fact, while I was standing in line, a middle aged woman walked past me, stopped and asked, “what are you doing with those sticks?”  “I am knitting.”  “Oh,” she said, “Is that like crochet?”  A moment flashed before me while I explained the similarities and differences between the two noble crafts [and she grew crazed with boredom and stabbed me]. Before I could come up with a reply she saved me by asking what I was making, “Socks, socks for my Dad.”  “Oh, I should try that,” she said, and tottered off on her heels.

I carried off in the lineup and kept knitting.  It wasn’t until I was comfortably seated in the coffee area by Gate 3, that I had time and presence of mind to take an honest look at the piece I’d been making.  Yep, it’s true.  This is way too big.

As mentioned earlier, I cast on 48 stitches – down a full 8 stitches from the first effort.  This should make a difference.  I knit 2 inches of 1×1 rib.  Then started on plain, easy, mindless stockinette.  I knit, and knit, and knit.  I phoned home, I texted friends.  I took photos of the sock with my phone so I could document the amazing progress of this pair of socks.   One and half hours into this activity, a feeling came upon me.  This sock is still too big.  Not as obvious as the last one, but it’s still too big.

Many of you knitters will know this feeling.  I comes on you quietly.

But another side of your brain says,

Yes it’s just fine.  You did a swatch.  You measured it out.

This went back and forth, while I kept knitting.

Don’t worry, once it’s washed up it’ll shrink to size.

And this went on until we [finally] boarded the plane to Calgary.

Once aboard and settled in, I looked at the sock.  I removed my boot and tried the sock on.  Yep, it’s way too big.  What was I thinking, why was I kidding myself?

I measured it again, getting [to no one who knits surprised  at this fact] a different gauge reading from knitting in the round than from my first flat measurement.  Sometimes you want to get something done so badly, you forget what you already know.  I can’t believe I made this mistake.  No time for personal admonishments.  I had a two and half hour flight ahead of me — knitting Nirvana.  Starting again was not a problem.

I promptly ripped it all out.  My seat mate looked over at me a full three times while I did this.  I wondered if he had experience with knitters and was wondering why I was engaging in this activity in silence? — no swearing or cursing out of me.  I am the consumate traveller.  Nearly invisible.

I didn’t rewind the tangle of yarn that landed in my lap. It seemed like a waste of time.  I cast on 42 stitches, 14 on each needle and started knitting.   By time we landed, I had completely knit up the nest of yarn that was in my lap. I was at exactly the same place in my knitting, as I was when I boarded the plane.

More later, with photos [as soon as I learn how to transfer them from my phone to my blog.]