I am so done with these mitts.

I agreed to make them for a good friend of mine — but somewhere between the promise to do it and finishing up all the other things before the promise, something shifted.

I still tried to make them.  I made the first one.  It’s lovely and perfect and follows the pattern I have designed for them.  [The fibre is a lace weight alpaca/tussah silk blend doubled throughout.]  In the meantime, I got became bored distracted and started several other projects, like the Claudia Skirt, preparing the Polwarth fibre, knitting the Lazy River socks, refinishing spinning wheels to name a few.

I even tried a variation on the pattern, making the coin lace happen every fourth row, so it coincided with the increases on the thumb gusset. . . .and that is where I think the trouble started.  Too many patterns in my head.

I needed to finish this pair of mitts, so I cast on the second one and started knitting.  I was pretty disciplined about it and only brought this along on my commute to town.  Things were going well and I was making good progress.   It seemed a bit smaller than the other one, but I didn’t believe it.

But they weren’t the same size.

Maybe the first one stretched because I tried it on so many times.  Maybe it would size itself when I washed it.

No.  The second one I made was indeed smaller than the first one.  And the reason was much simpler than anything I was willing to admit to at first consider.  It was due to the fact that I took such a long break in between making these two mitts, and also tried a variation on the theme that I forgot.  I simply forgot that in the first mitt I did the repeat every 8th row, and in the second mitt I did it every 7th row.  Why?  Who knows?  But after a total of 10 repeats, that’s 10 extra rows on one of the mitts.  Thus, they aren’t the same size.

Look at the photo, it seems that the problem started after the thumb.

The question is: do it rip it out and re-do it, or consider myself halfway to two pairs of mitts? 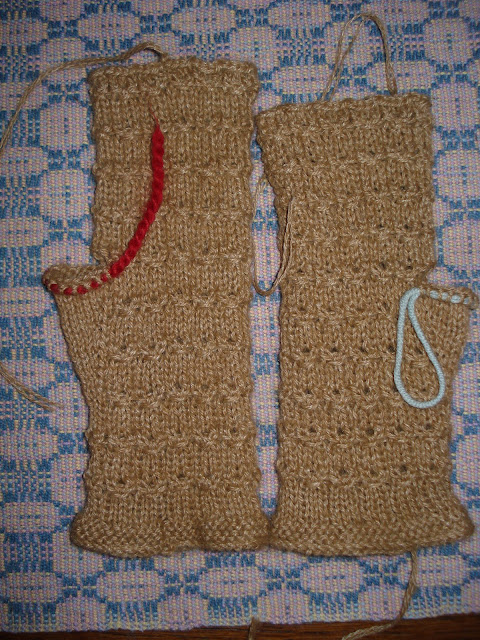 They are worth finishing.  But I am so dismayed by this rookie mistake, I need time to heal my knitter’s ego make a plan B.   Off to spin some yarn.