I love spinning, especially spinning on my spindles. They are beautiful tools and I take any excuse to spend time with them. I love all kinds of fibres, but especially the variety of wool we have available to us these days. It seems though there are not enough hours in a day to play with spindles, play with fibres, make yarn, and then do something with it, like knit.

I figured that I needed to start spinning faster. What would it look like if I only worked on one project from start to finish? And during that period, tried to spin as quickly and as efficiently as possible? How fast is fast? At least for me.

I work full time, Monday to Friday. So my fibre arts happen in the evenings and on weekends. On Wednesday evening I pulled out the March 2015 Sweet Georgia Yarns (SGY) fibre club installment. It was a 100g braid of 100% corriedale – the colourway is Beginner’s Luck.

This is the fibre opened up so you can see the colour way. It’s blue with several gradations of green. All the colour changes are gentle and not dramatic. I decided that I wanted the colours to blend as much as possible, so I split the entire roving in half, weighed them to make sure I’d have equal amounts, then split the fibre further into pencil rovings and started spinning. 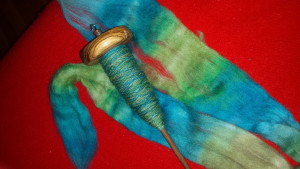 It took Wednesday and Thursday evening to fill spindle one. And Friday to spin spindle two. 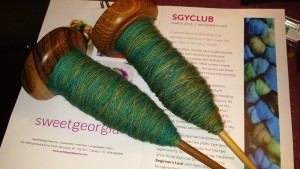 On Saturday morning I wound the singles from both spindles into a double stranded ball for plying. And brought out my Steampunk spindle by Scott Snyder for the job. I wanted to try to make one skein of plied yarn. 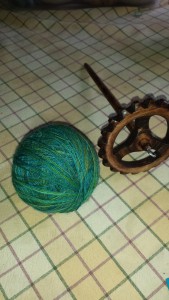 And here is the spindle, as filled with yarn as you could get. It was getting heavy and I was in danger of running out of shaft to spin. 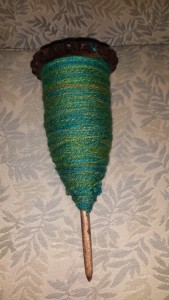 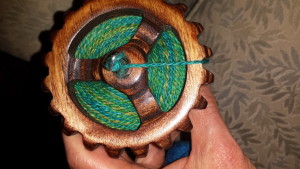 After plying I let it sit overnight and this morning wound it off into a skein. 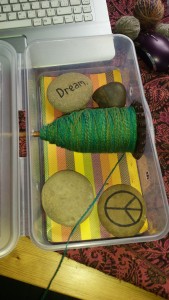 One nice skein – measures 241 yds or 223 metres and weighs 109 grams. A decent amount of yarn produced in three evenings, one day and a morning. All found time. 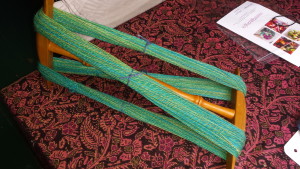 So what did I learn? Here are some things I noticed that can help me spin faster into the future:

I knew exactly what I wanted to do with this yarn, how I wanted to spin it and how I wanted to play with the colourway. I wasn’t making decisions every time I picked up the fibre. The experimenting was over and I was just down to spinning.

Yes, just spin. Don’t stop and admire your yarn in between each piece you complete and when you pick up another to join on. I tend to do that and it’s a time sink. Just spin, and spin, and spin.

3. Notice where you are using your time

Take note of how long things take you to do. Getting the fibre onto the wrist so it’s out of the way was taking me too much time. I had to put down the spindle, grab the new fibre, wrap it around my wrist, pick up the spindle and get started again. I figured out a seamless way to grap the new fibre and tuck it into a knitted wrist distaff without having to stop and put down the spindle. That saved a minute or less. But when you figure that you are doing that several dozens of times – it starts to add up.

I also noticed that winding on takes time. And there is the temptation to spin a long amount, but then when you wind that on, in order to keep it under tension I’d have to butterfly it until I can comfortably grab the spindle. So for me, I was more efficient to spin an amount I can comfortably manage and then wind that on.

4. Work with more than one spindle

Now here’s a rationale for having more than one spindle on hand! You can and I have on several occasions spun yarn using one spindle for the entire project. I spin singles one on the spindle and then wind it off into a neat, hard ball. Then I spin singles two using the same spindle. When that is done I wind that singles, along with the singles from the first spinning (the one that is sitting neatly in a hard ball) into a double stranded ball. It is this ball I use for plying.

Working with more than one spindle allowed me to save time winding off the singles yarn. I filled spindle one. Then I filled spindle two. I put both of them into the lazy kate and wound my double stranded ball from both spindles – it took 20 full minutes.

I am sure I will think up a few more things that made this go faster. But that’s it for now. I am going to wash the skein and will measure it again for the final total.

Have a great long weekend, and thanks for reading.

When I first got into spinning, I had romantic notions about raising my own sheep and alpacas, with the occasional angora goat — a fleece flock I called it. That was before I spent some time with friends who actually raise sheep. It’s not a money maker — it is a labour of love. Animals need a lot of attention and the time you spend on them is time you can’t spend spinning and doing fibre preparation.

So in my development as a fibre artist I decided that I would do all I could to support those who are raising these fantastic animals — especially those who are doing it as small scale farmers. For as much as my crafts of spinning and fibre preparation need to be continued into the next generation or we’ll lose them, so too is the art of animal husbandry. The art and craft of taking care of domestic animals.  They don’t take care of themselves.  They need a lot of looking after for a healthy and stress free animal provides the best kind of fibre — and meat.  Sorry to the vegetarians, but it’s a fact.

In my teaching workshops, I am committed to using and promoting locally sourced fibres. So as I begin getting materials ready to teach 2 full-day spinning workshops in Haida Gwaii in mid-May, I start by looking at what the local fibre producers have to offer.  This weekend was Fibreswest and I was thrilled to meet Devon Stringer and her mom from Humming Bee Farm there.  They had just the kind of fibre I was looking for — and a great story.  From her website:

“At Humming Bee Farm we breed and raise high quality, purebred white and colored Angora goats. Angora goats are on Canada’s Rare Breed Conservation List and we are very pleased to be helping protect them from becoming an endangered species.  We shear our goats twice a year, once in late March and once again in late September. On average we get about 10 pounds of lusterous white mohair from each goat, each year. Mohair is a wonderful fibre and in much demand by our local spinners and weavers.”

Here is some fibre from Humming Fee Farm  that I purchased this weekend for the workshops. I bought 4 1/2 lbs of lovely corriedale and 1/2 lb of yearling mohair. I’ve spent the morning portioning the mohair into bags and making the wool into braids.  The braids on the right are 50 g braids and the bags in the plastic box each contain 15 g of the yearling mohair.  The corriedale will be used in both the Beginning Spindling and Advanced Spindling workshops. The mohair is for fibre blending in the Advanced workshop.  There are many more fibres to gather and prepare (alpaca, silk and other kinds of wool) but this is the start.

And a grand one it is thanks to Devon and her family.