More photos of the green yarn — two skeins plied up so far, probably another one, maybe two more to come. The photo below is the yarn, freshly plied, loaded onto the niddy-noddy, the tool that helps you make 2 yard skeins. 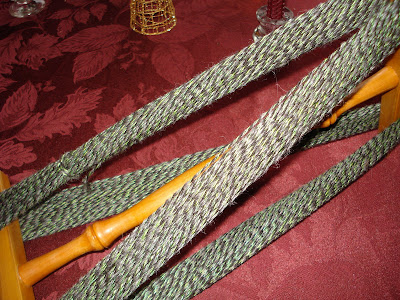 The next step is to wash the yarn to help all the fibres relax and bloom.  Here’s the yarn going into a hot soapy bath, where they will soak for about five minutes. 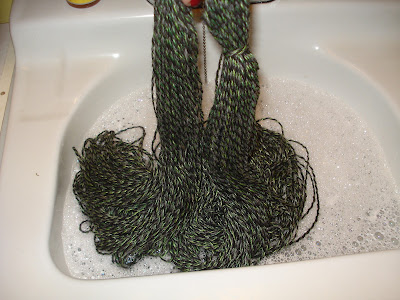 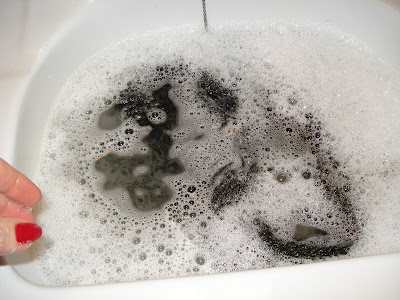 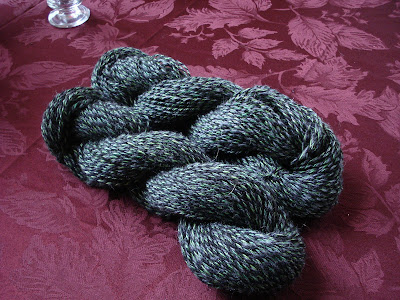 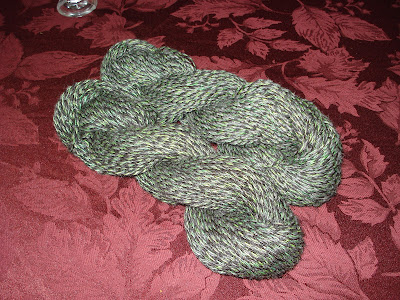 This is a pretty decent amount of yarn and, as noted earlier, there are probably two more skeins to come.  Now, what to do with this yarn?  I was going to make some socks, still might, but with this much yarn, all looking the same, I could dream up a much larger project.
Fiber Arts Bloggers

Found the camera, charged up the battery and here are some photos of the three-ply yarn I was telling you about in the previous post.

The colours aren’t coming through in these photos; bad lighting in my living room.  After this bobbin is filled, I will skein it off and start all over again plying the singles and filling bobbins until the fibre runs out.  I will have to spin up more of the green to keep things even with the black and grey, and I do have it in my stash.

After it’s a spun up, the yarn gets washed and then “thwacked”.  To thwack yarn, you take it out of the rinse water, gently squeeze the water out of it and thwack it, hit it really hard against the side of the bathtub.  It’s a very satisfying thing to do and it does wonders for your yarn.  It helps the llama and alpaca bloom and felt a wee bit at the core.  Do this a couple of times on each skein and then hang it to dry.  Will try to get to all of this on the weekend.

I was happily spinning up the black llama and was nearly finished it when I was struck by a memory.

I hate knitting with black yarn.

It is difficult to see what I am doing, I can’t read my knitting.  Why am I setting myself up for a project frought with frustration?  Maybe it’s my eyesight, maybe it’s the poor lighting of the spaces where I do most of my knitting these days [the bus and Skytrain].  So last Sunday, I decided on Plan B.

Background: A while ago I purchased a couple skeins of commercially spun yarn that, from a distance, was a lovely green.  Up close, and peeling apart the three plies that the yarn consisted of, I discovered that the yarn was actually a black, grey and light green single; all working together to make a green yarn.  It was so clever and interesting for the eye.  I was determined to try it out for myself.

Plan B:
So, I quickly finished spinning up the 100 g “bump” of black llama and then started on a 100 g bump of grey cria alpaca that came from another local farm.  Thanks to the Eastern and Western Grey Cup Semi Finals [Canadian Football League] that were on television last Sunday, I had several hours of spinnning.  I was able to get two full bobbins of black llama and grey alpaca.  In my cluster of unfinished spinning projects, I had a full bobbin of green merino/tencel/nylon blend from Sweet Georgia Yarns.  I had spun it fine, and it took such a long time to fill one bobbin, I just never managed to get back to spinning up a second one for plying.  But this one was perfect.  For this Plan B, I needed thinly spun singles, and these three that I had on hand, was what I believed would do the trick.

So I plied the three together.  I have about 1/2 a bobbin filled, but have had to take a break from it due to a fantastically crazy work schedule this week that has me out of town, and away from my wheel.  I will finish it up this weekend — watching the Grey Cup Final, and take some photos so you can see there is method [and reasonably good results] to my madness.