Last year I did an experiment and grew a wee field of flax. It was a terrific learning experience, so much so that I repeated the experiment this year. This year, instead of obtaining my seed stock from the bulk bins at Save-On Foods, I purchased the actual flax for linen variety from Richters in Goodwood, Ontario. The seed variety is Linum usitatissiumum “Evelin”. I bought two kilos of it.

Yep, two kilos. That’s a lot of seed. Who knew?

So I planted a bed. And then realized that I scarcely made a dent in the seed stock, so a week or so later planted another bed on the north side of the house. Then, when the 100-year old oak had to be taken down, we had a chance to put in a new garden with nine beds. We planted up several of those beds, the others that we just wanted to reserve, were sown with flax. I now have four beds of flax that are thankfully, in various stages of growth.

Bed #1 planted in the same spot as it was planted last year. It’s already blooming. Flax blooms in the morning and then it’s done. These photos were taken mid-morning.

Here’s bed #2. I did nothing special to this bed in terms of preparation, just raked up the soil a bit to loosen the top layer and then broadcast the seeds quite thickly. It gets more sun than bed #1 so it’s catching up. It just started blooming today.

Here’s bed #3 and you can see bed #4 as a green ribbon at the top of the photo. Both of these beds were planted about two weeks ago. The soil, rock hard river silt, was turned and knocked about a bit. And then I threw in the flax seeds as a way to save the bed, and keep the weeds at bay. If I get a harvest from this, that will be grand, but I’m already up to my eye balls in flax and a potential nightmare retting process. Thinking about getting a kiddy-pool to help me out with that.

Here’s the new garden. It gets full-on sunshine so it will be the hot-spot. Here’s were we will grow tomatoes, peppers, zucchini and other heat loving veggies. Lot’s more work to do on it, but it’s a good start.

Yesterday I hosted a “Good Day to Dye 2013” at our home here in Glen Valley. There were five of us in total, all with varying degrees of experience making an indigo dye pot and doing the actual dyeing. Each dye pot could dye approximately two pounds of fibre. So we made three dye pots.

You start out by making the dye stock: that’s what’s below. After you make it you have to let it sit for an hour to “reduce”. In that process it turns from being a stunning deep indigo to a lime green.

After the stock reduces, you carefully add it to the five-gallon bucket of water (which has a wee bit a lye and ivory detergent in it). You can’t just pour the dye stock into the water, because you can’t let the dye hit the air. When it hits the air, it oxidizes and turns dark blue/indigo and expires the dye.

So you carefully lower the entire jar of dye solution into the bucket and empty it without letting it hit the air. Then you let that sit for another hour. 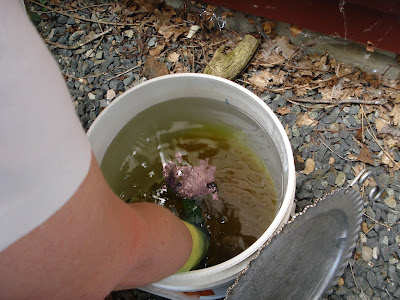 There’s a lot of down time as you wait for the stock to reduce, then wait for the dye to settle in the dye pot. So we entertained ourselves with good food, beverages and spinning.
When the dye pot was ready, we added the wetted fibre and skeins to the dye pot – and then let that sit for half-an-hour. After that we carefully lifted it out of the dye pot, making sure to squeeze the liquid out of it while it was below the surface. The skein below was once white. When it’s lifted out of the indigo pot it looks light greeny-blue. But within moments, as the air hits it, it starts to turn a lovely blue. It’s a magic moment. You can do repeat dippings if you want to make the colour more intense. Just let the fibre/yarn sit in the air for half-an-hour and then toss it back into the dye pot. 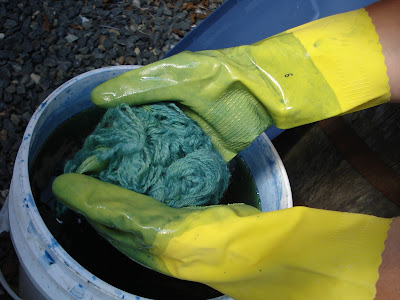 The grey and white skeins below were added to the dyepot. Here’s what they looked like after they were spun and washed. 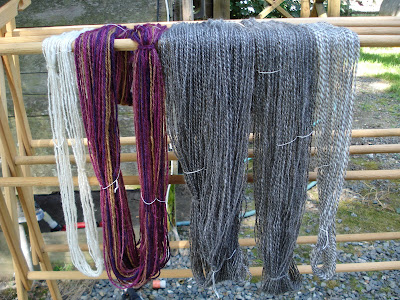 The five skeins below are 1) a white skein, 2) the two grey skeins featured above, 3) another white skein and the last one will be explained further on. The fibre on top is the fibre we are going to be using in the sheep-to-shawl demonstration at the Aldergrove Fair Days. 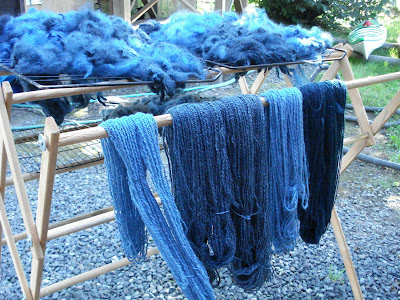 Once you see the magic of the indigo dye pot, you get Dyeing Fever. That means you start to look around for all kinds of other things you can throw into the dye pot. I’ve had this lovely skein of hand spun blue-faced leicester (Sweet Georgia Yarns — Yellow Curd) in my stash for a while. It’s lovely and I have nothing against yellow, but I was curious what would happen if it went into an indigo pot. Here’s the before photo:

And here’s the after shot. I was surprised at how much indigo this absorbed with only one dipping.

However, once the dyeing is over, you let your fibre/yarn sit for minimum of 24 hours and then you give it a final rinse. So I may lose some of the intensity and see a bit of green.

And here are the results of my dyeing efforts. The rack was completely full yesterday with skeins and fibre from five gals. But this is my stuff after everyone left. Later today I’ll rinse it out and if there’s a dramatic difference I’ll do an update.

It’s a fine and even quite pleasant until you make a mistake. Even though this is rated 2/5 for difficulty, it should be rated 5/5 for correcting knitting errors. In most instances when you notice a mistake a few rows back, you can dig down and correct the error. I say that like it is an easy thing to do, and for the most part, it’s quite straightforward. A knit can be turned into a purl, a purl to a knit, a yarn over dropped or created. But it’s not that easy with this shawl.

This pattern, Tilt, does just that — it tilts. Every other row, the knitting pattern moves over a stitch, giving the lovely effect of the tilt. It is quite a gorgeous effect and makes for interesting knitting because you can easily read the pattern. But it is nearly impossible to correct an error that occurred a few rows down.

(This isn’t a photo of an error, it’s to show you the way the pattern tilts — first to the left and now on this second to last section, to the right. If you happen to find an error, keep it to yourself please.)

The other day, while happily knitting on my commute to work, I noticed a section where I reversed the pattern.  I did a yo, k3tog, yo in the place where I should have simply knit three — and I merrily did that a few times.  I know it’s only knitting and it’s just a shawl that I really don’t need anyway, but when I discovered that series of errors, I went through all the stages of grief:

And with the new found acceptance and a safe plan, I did just that. I tinked back two and half rounds. At over 600 stitches per round at this stage, it was no small feat. In doing this I discovered a couple of things. Going back like that was a full-proof way to fix the error. I tinked right back to the problem area and then re-knit it the right way. And that felt good. It was fixed, it was fixed right.

The other surprising thing I learned was that knitting or tinking, it’s all the same action. I mostly knit because I like keeping my hands busy, heaven knows I don’t need another shawl or scarf. I just like to knit. And whether it’s going forwards or backwards, it keeps my hands busy and my mind focused.

It wasn’t so bad after all. Really. 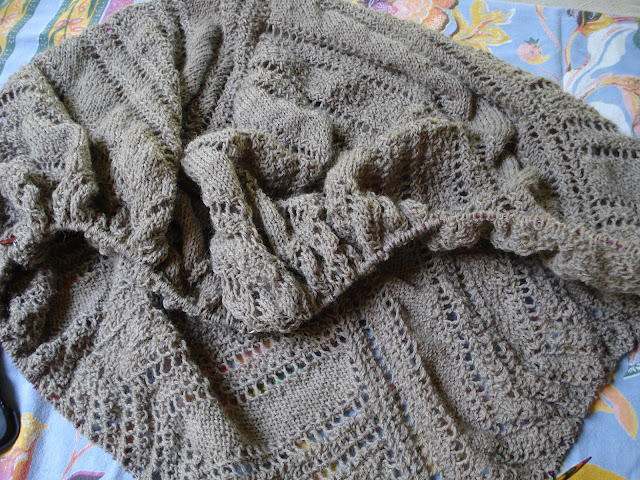