The third weaving project was one that I had in mind for months. At Olds College Fibre Week I purchased some dark grey and light grey rovings from a local producer. It wasn’t super soft, but it was beautiful greys. I spun them up (woolen) and when I lined them up next to the white yarn I made in Spinzilla 2015 – I new my dream for a blanket was going to be realized. 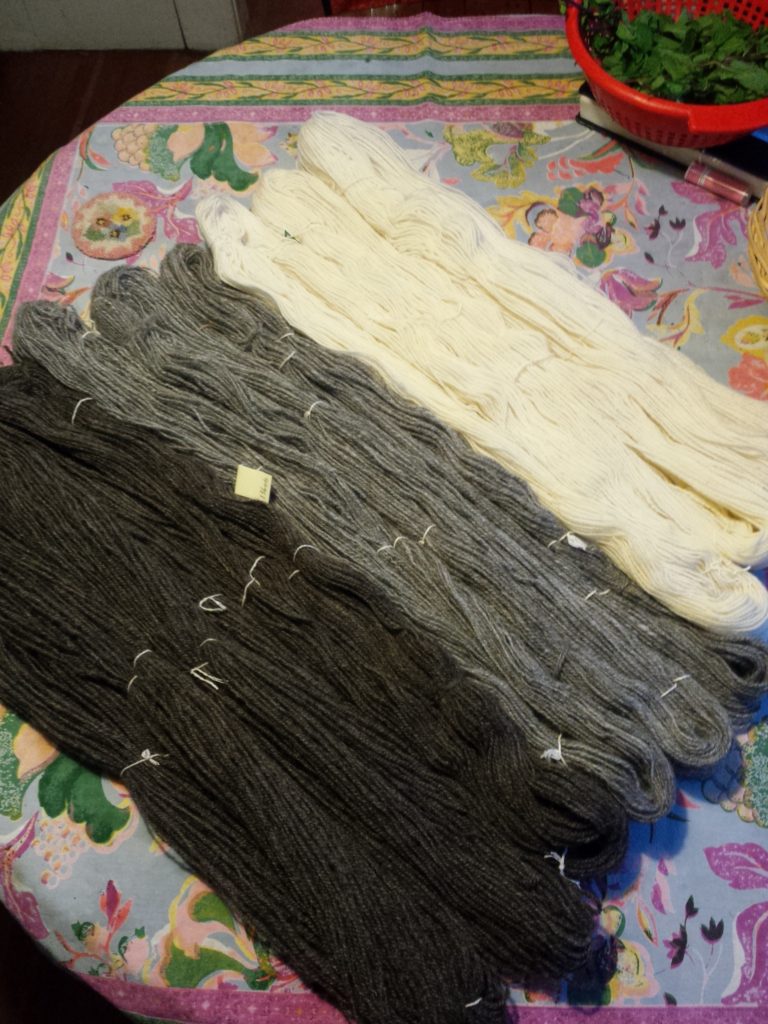 I planned to use the full width of the loom and to do a kind of checked pattern – 20 dark grey; 20 light grey; 20 white, and to weave it with the same pattern. But at the last minute, I decided to add a shot of red yarn to the pattern. So the threading became 18 dark grey; 18 light grey; 18 white, 6 red.

I was so excited to get this started that for a while I lost my weaving smarts. I couldn’t work at the desk in my studio because my youngest daughter was using the space as a study to finish up her final papers and study for university exams.

So I set myself up on the landing – it’s a large space and I believed it would be perfect for making the warp. Except for the fact that it didn’t have any solid heavy tables that I learned, serve an important function when making the warp. Tension. It holds the tension that is created when you are pulling the yarns through the reed and wrapping them around a warping peg on the other side of the room.

I also learned that the clamps they provide you with in the kit serve a function. They aren’t optional. And I also learned that when your loom starts to tilt and move towards the warping peg, threatening the length of future warp threads, duct tape won’t hold it in place. There were a few other rookie mistakes I made in the process of making the warp for this blanket, but that’s enough for now. I promise, I won’t be making them again, so no reason to re-live the humiliation.

Once I got the loom fully dressed and ready to weave, the weaving went well. The 100% wool handspun had a tendency to stick to each other sometimes, so I had to be careful when lifting or lowering the reed, that the correct threads were moving. 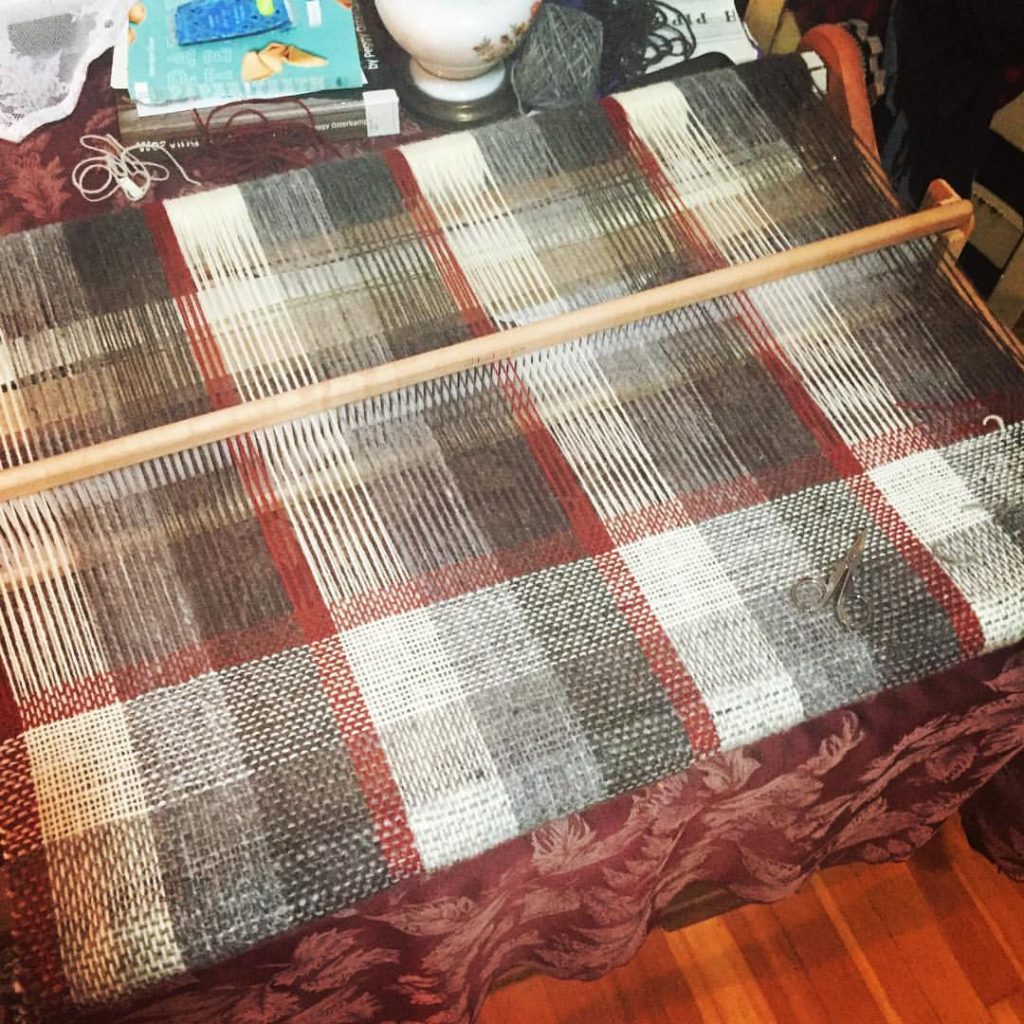 Here’s a a close-up of the fabric being made. I gently beat each strand into place, leaving as much space as the width of the strand itself. 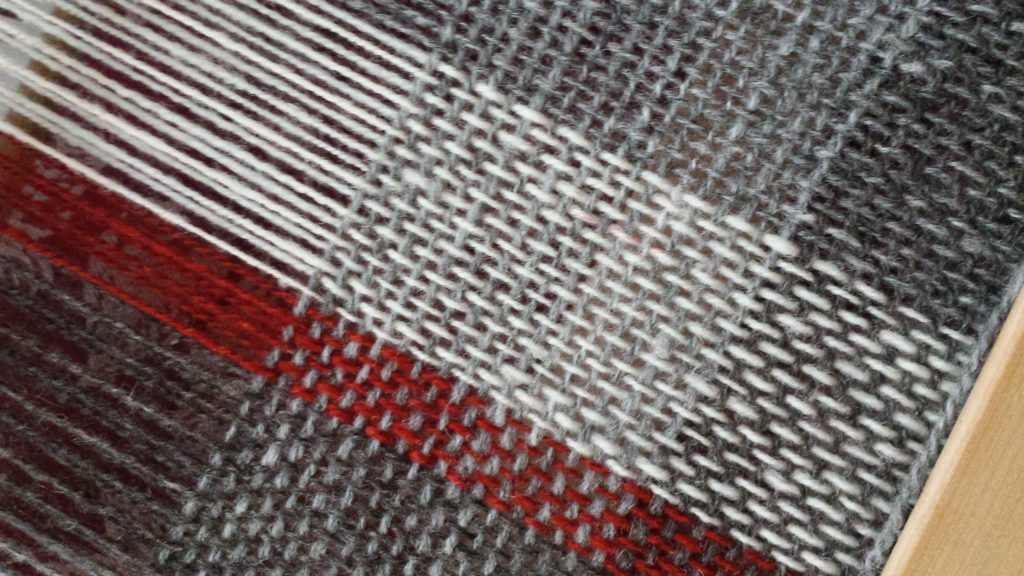 Here is a shot of it right off the loom. 60″ x 30″. I had hoped it would be longer, but my bungles with the warping process is what reduced the length. 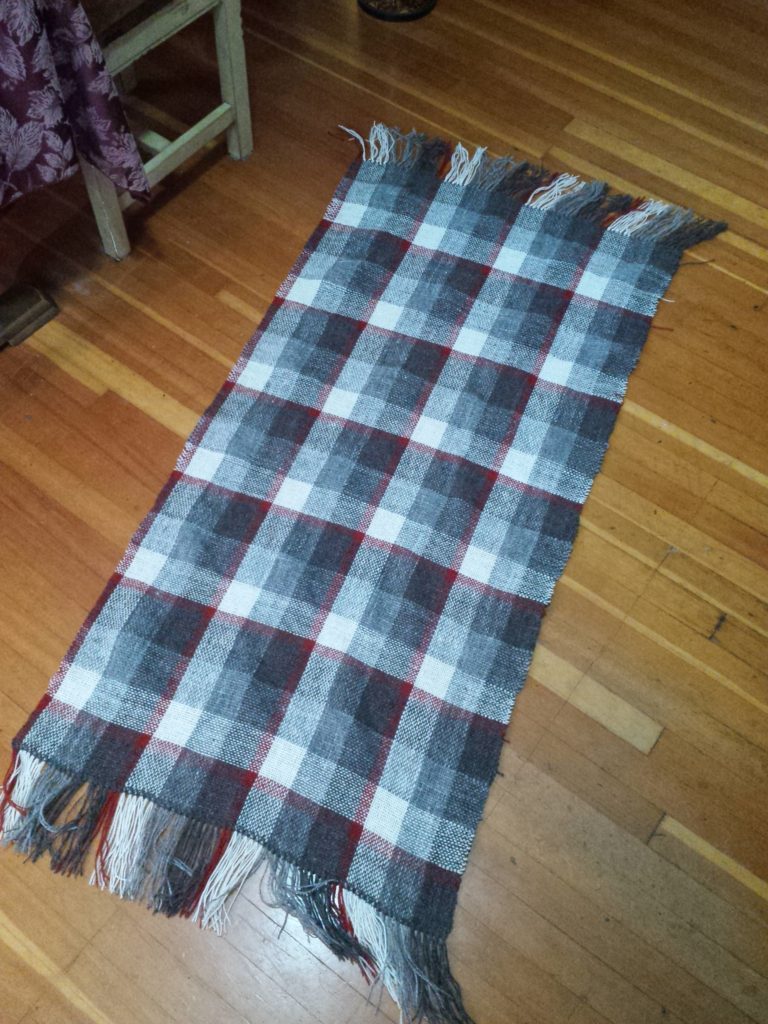 And here it is after it has been washed, bashed and dried in the dryer for 10 minutes. The yarn fulled and filled in the spaces, but because I kept the beat light, it is still very soft and has a lovely drape. The final measurements are 49″ x 25″.

I am officially hooked as a weaver. All I can think about is what is next? 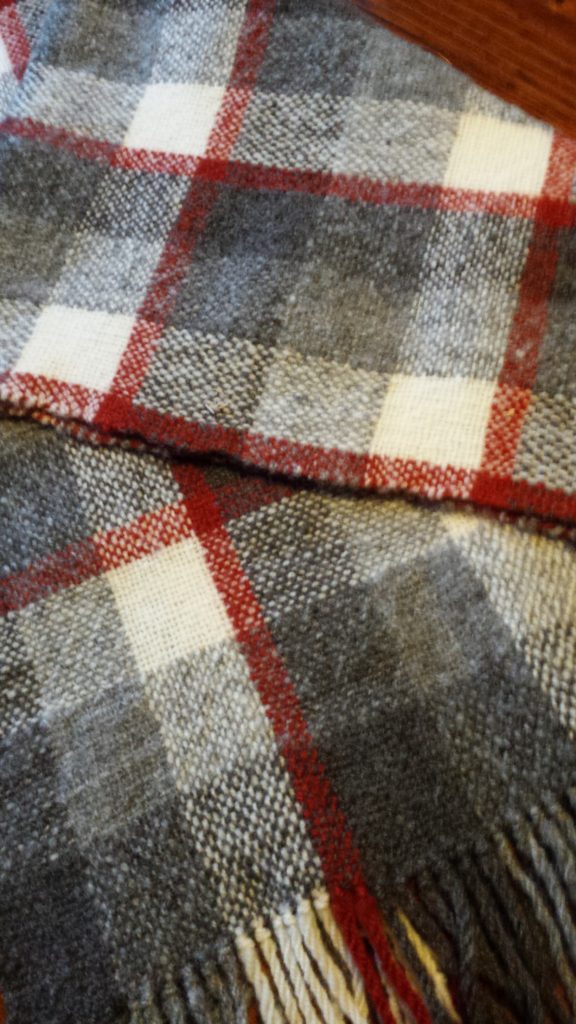 Here it is on the 32″ Ashford Rigid Heddle loom. It was easy to weave, the colour changes that naturally occurred from the variegated yarn created interest. I did have a difficult time keeping the beat soft. The yarn wanted to snug tightly against the yarn in the previous row. 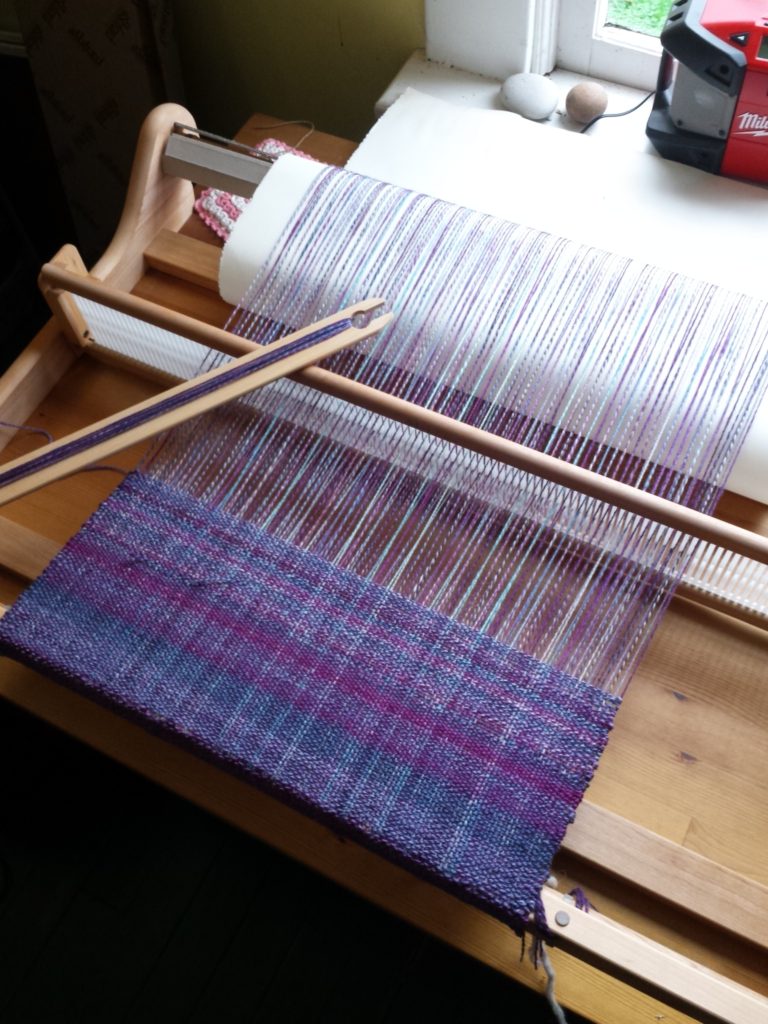 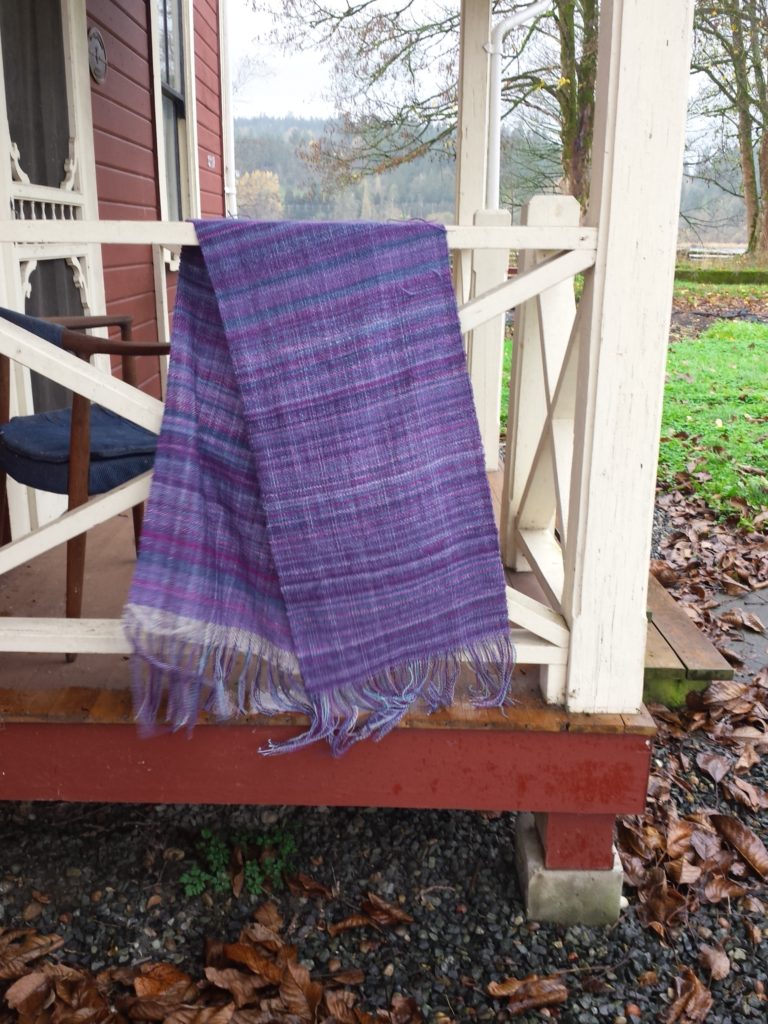 Here’s a closeup of the fabric after I washed it. Everything shrunk and fulled a wee bit, filling in the spaces. It is soft and has a lovely drape. Final measurements are 61″ x 14.5″. That’s a lot of shrinkage, but that’s the way it goes in weaving I guess. (Measurement doesn’t include the 5″ twisted fringe on each end.) 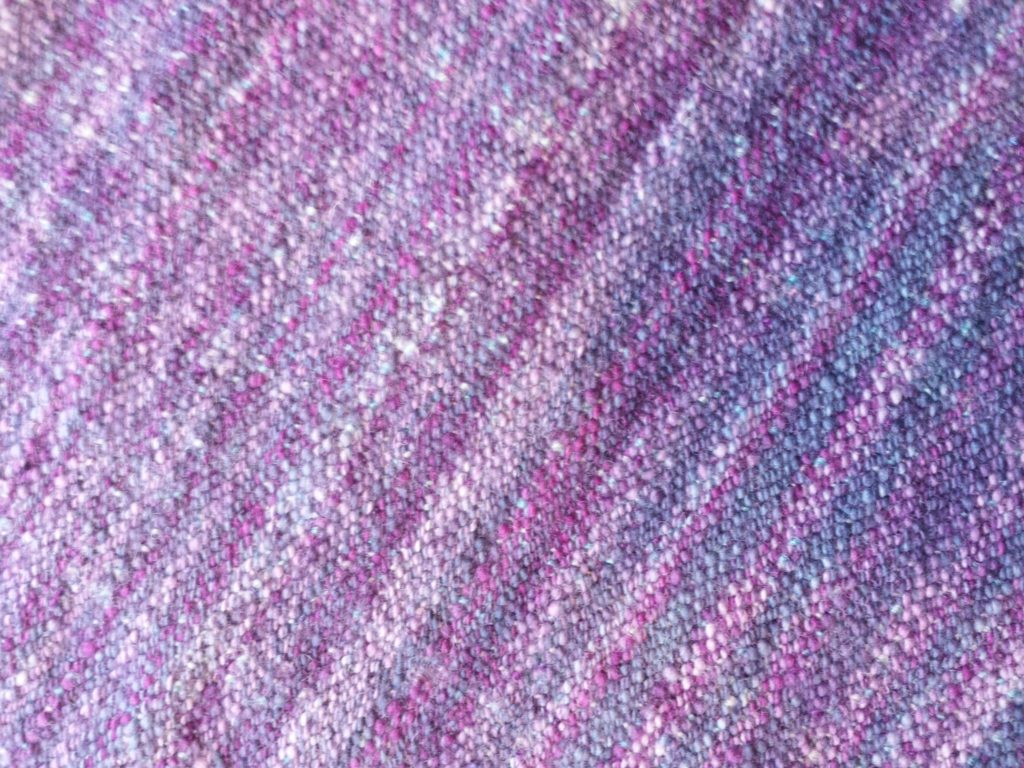