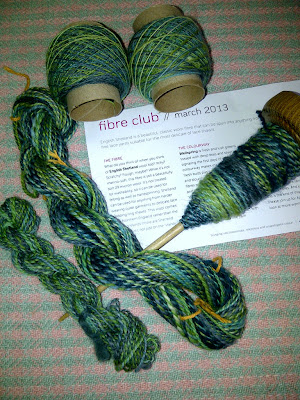 Here’s a photo of the March Fibre club yarn, nearly complete. It’s English Shetland wool that is a delight to spin, especially after spinning the slippery silky/merino/nylon Candygram last week. I am spinning this yarn to be a worsted weight and it spun up fast. All of it has been spun it all on my Houndesign Henry’s Dervish spindle.

I just have two more sets of singles to ply and then I’ll finish them off by boiling and bashing them around. That way they’ll get slightly felted and it also may even out the colours a bit.  The dark colours may lose a bit of dye and the lighter ones may pick it up. At least that’s what I hope will happen.

I finished up the yarn. And then I put all the skeins well tied up with figure eights, into a pasta pot with hot water and a bit of shampoo. I brought it to a boil and then held it at a simmer for 15 minutes. In that time the twist relaxed, the yarn evened out and the colours became a bit more even. The dark sections lost some of their dye and the lighter sections picked it up. I like this yarn a lot better now. 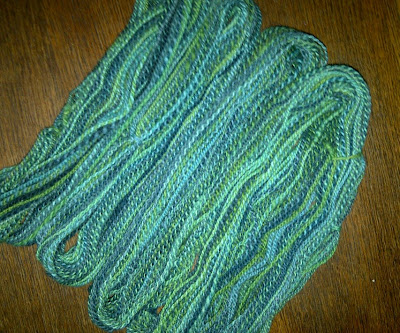 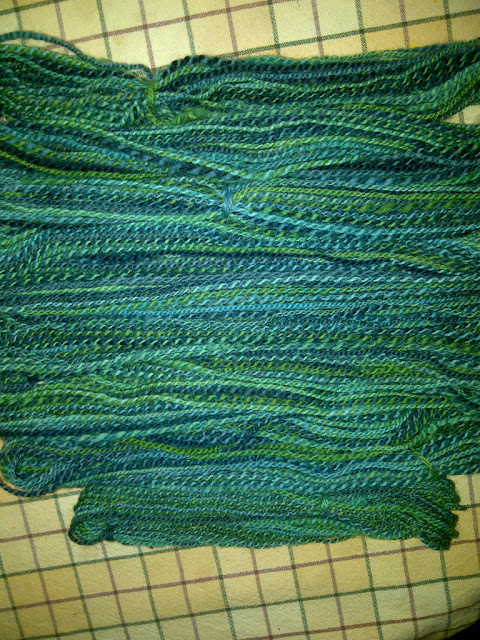 Not sure what it will be. There’s 100+grams of it. Enough to make a set of half-mitts and a hat. Or it could just go into my yarn collection.  I seem to be much more prolific making yarn than I am knitting these days.