There are few tasks easier than harvesting flax. You grab a handful of it right down near the base and pull. Roots and all. Give it a good shake to remove all the soil and put it somewhere to dry out. That’s it.

The trick, and yes there’s always a trick, is to decide WHEN to harvest the flax.

Let’s take a look at flax. The flax in the photo below is in full bloom. It’s an amazing sight.

You can read a lot of things about when to harvest flax, and some of it is different. In essence, you want to harvest the flax then the plant has reached a certain level of maturity. The older or more mature the plant, the stronger/thicker/coarser the fibres. When a plant flowers that’s a sign that it has reached a particular stage. After the flowering, the seed bolls form. Another stage you witness. After that, the leaves start to dry out moving from the bottom of the plant up to the top.  Many sources suggest you harvest the flax when most of the plants have stopped blooming. The thinking is that if you wait too long, the fibres will be too coarse. But if you don’t wait long enough, the fibres won’t be strong enough to withstand the breaking, scrutching and hackling to get the fibres.

I decided to harvest bed #1 when most of the flowers had stopped blooming and the bottom half of the plant started to dry out. See below.

I’ve had best results drying my flax by leaning it against something – like a post or fence. I think it helps with the initial drying as the air can circulate.

I waited a bit longer to harvest bed #3. All the flowers had stopped blooming, the seed bolls starting to form and most of the plant dried out.

Our days were still long and hot so after a few days drying against the fence, I spread them out on the ground. The other two beds had already been harvested, dried, rippled and bed #1 retted. So I felt I was a bit behind with this one. I had to stave off that feeling as I was trying to do different experiments.

This is bed #3. The last one harvested, drying on my front yard.

If you want to see a really quick video on harvesting/pulling flax, check out my Instagram feed. I can’t figure out how to embed videos – so that will have to do. I’m @dianatwiss on Instagram.

I planted my three flax beds on May 19. The Fraser River had still not crested, the berm was still in place in the event of flooding, but I took a chance. The beds had been covered with landscape cloth for a few months, so there were no weeds, and the soil was not compacted from the winter rains. I raked up the top few inches and measured out three beds.

I had seeds from three different sources and a deep desire to learn more about growing and processing flax. We have a good amount of space out here and I had time off from my day job, aka Holidays.

Germination occurred on day 4! Seriously, only four days to germination. The weather was warm, the soil nicely warmed up, and I kept the soil moist – not wet.

Three weeks later, they continue to grow. There were some patchy spots that I tried to re-seed. Those plants never caught up.

The weather continued to cooperate. A little over a month later, on June 21, the flax beds were very well established and mostly measured 12′.

Six weeks later, the flax was well over two feet tall. My cat discovered that a flax bed is a nice place to escape the heat. She tunnelled in and made herself a small bed. It caused several of the plants to bend and those plants stayed thin. Next year, I figure out some kind of fencing to keep her out.

This last photo was taken July 20 – two months since planting. And the flax is starting to bloom. It blooms in the morning and closes in the evening. Lovely blue flowers. Bed #1 was the tallest, #2 the second tallest, and #3 the shortest – but still of good length for processing to linen.

This year, my second year of experimenting with growing and processing flax for linen, I had four good sized beds of flax growing. I planted the first two early in the season and they finished up nicely. There was enough time in the season for them to sufficiently dry, get rippled and wet retted. They are now tied up into a couple of dozen stricks for use in my “Flax to Linen” workshop that I hope to have at FibresWest 2014.
The other two beds presented different challenges.They were started later in the season and by the time they were ready to be harvested — had finished their blooming, the rains had come in. The rain makes it difficult for anything to dry, but it also causes the plant to fall over. When it falls over, it bends. I have learned that this “bend” is not a characteristic that you want your drying/retting flax to have.
I haven’t been able to sufficiently dry these last two beds of flax, so the rippling didn’t happen. In fact, I got busy and lost track of them, so on the ground they went. Not a bad thing as you will see.
What’s below is the flax from the very last bed dew retting on the ground right on the lawn. It’s been raining a lot and next week we are rumoured to be hosting some below zero temperatures. Let’s see how flax likes that.

You can see why dew retting creates a grayish linen. The molds that melt the pectin covering away stain it. 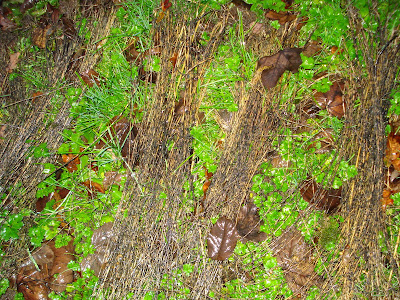 Below is batch #3. It’s a hybrid of dew retting at the beginning and most recently, wet retting. Even though the dew retting was coming along fine and I was starting to see the flax fibres being released, it was slimy and I wanted that gone.

So I tossed it back into the wet retting pool. It’s been cold so the retting is going slowly. There is no foaming and swamp smell like I got with the earlier wet retting. 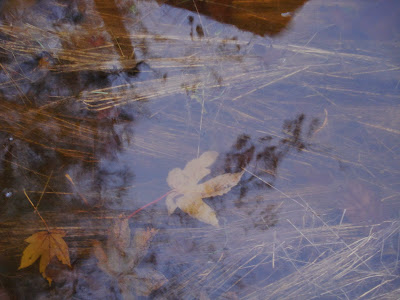 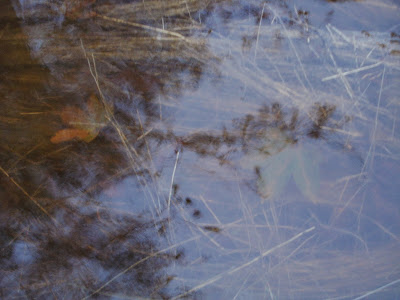 The constant rain keeps the water fresh. My challenge with this is how to dry it?  I’ll have to take it out soon and put it onto drying racks that will sit in my greenhouse over the winter. Won’t dry much, but at least won’t get wetter. 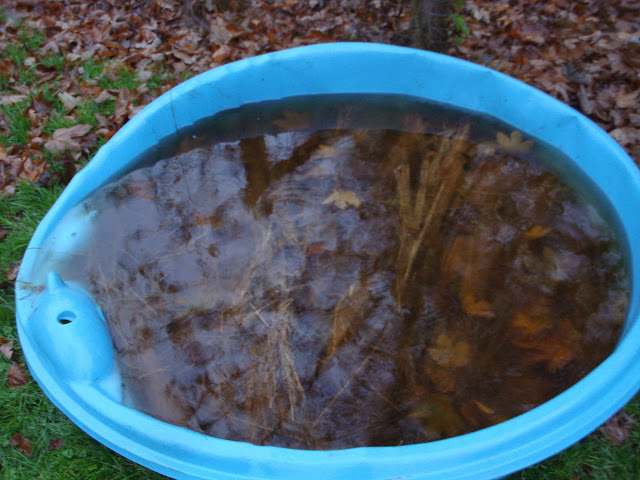 Life in the valley is good. I have space to do these kinds of experiments, not sure how I’d so that if I lived in town.
Fiber Arts Bloggers