The Fort Langley National Historic site is a former trading post of the Hudson’s Bay Company. This past weekend they had a series of events focused on the homesteading aspect of running a trading post. They had events that taught people how to make butter, how laundry was done before Maytag, preparing and cooking bannock, and washing wool and spinning fibre, just to name a few.
That’s where we came in. A fellow guild member and I volunteered to run these workshops. The first one was about washing wool. So we had a large cauldron of water on to boil at the fire pit in the middle of the square at the Fort. People gathered on the benches around the fire and we gave them an overview of the wool to fabric process. Then we showed them dirty, greasy fleece and tossed it all in the cauldron of boiling water that was removed from the heat source. Instantly the water turned the colour of cafe au lait. We put the lid on the cauldron and then headed up to the big house where we would further demonstrate carding and spinning. (The cauldron of wool sat for 1/2 an hour and then we drained it off. One more hot water bath and it was considered clean by their standards. And for the most part it was.)
Here’s a “before” photo of the fibre. It actually looks better than it is. It is greasy and full of dirt. So much that the dark colours of the fibre are not actually true. Look at the “after photo.

When all the lanolin and dirt is out of the fleece you can see that it’s much lighter in colour. And the browns are also lighter and not a chocolatey in colour. The fleece is a locally sourced Jacob. It’s a kind of sheep that has many colours on its coat.

After the washing demo we went up to the Big House and showed the kids (several dozen of them, what were we thinking?) how to card wool. Then we spun up their wee rolags and made miniature skeins for them. I think it was a good program because I exposed the kids to the whole process. It also showed them the role they would have had to play in yesteryear as carding was a job that children did.

The only problem with the day was my costume. Here it is, and yes, let’s a pretend that I have such a svelte waistline. 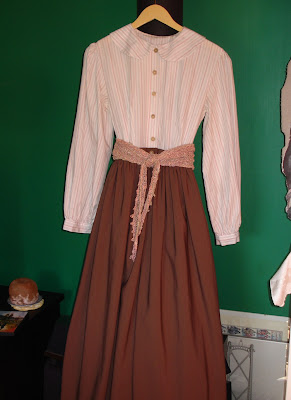 Good looking costume and it fit well. However, it was nearly 30 degrees in the Fort due to the full-on sunshine and lack of wind. The blouse is a poly-cotton and the skirt is a heavy weight 100% polyester. I was boiling and thanking my lucky stars that historical re-enactment only goes so far. If I had to have worn a corset I would have stabbed someone. As it was I survived by discreetly fanning the dress against my legs and cursing the inventor of plastic fabric.
I’d do it again in a heartbeat, but next time I’m making my own costume.
Thanks Fort for a lovely time.
Fiber Arts Bloggers