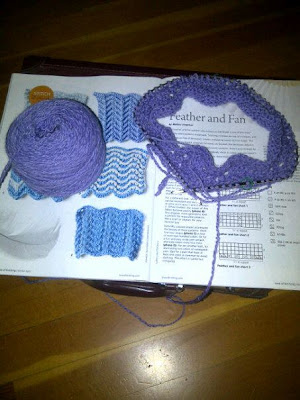 My love affair with the Feather and Fan lace pattern continues.  I liked the result of the last cowl I made so much, I had to make another one.  This time, I wanted one that fit a bit closer around the neck.  So I used slightly smaller needles (4mm), thinner yarn (DK) and fewer stitches.

I knit a tube using the Feather and Fan lace pattern for a total of 8 inches (20cm) then did a garter stitch border and cast off.  I tested it out by wearing it on our weekly early morning grocery trip.  While I love it, especially the colour and the softness of the yarn — handspun locally sourced Ramboulette, I didn’t like the fact it was a tube.  I needed a bit of something to cover my upper chest, but a bit of a bib, like I made on the other one.

Thanksfully I have plenty of yarn left over.  So while I join the family to watch the various hockey games on today, I will undo the garter edge and knit a bit of flared edge.

Here’s the pattern to make your own cowl:

Repeat these 4 rows to make Feather and Fan lace pattern when knitting in the round.

Instructions to make the Purple Cowl:

I hate the stress of trying not to twist the stitches when joining in the round, almost as much as I dislike doing garter stitch on circular needles.  So this trick deals with both issues:  Instead of joining in the round, knit back and forth on circular needles doing garter stitch for 4 rows.  After 4 rows, join in the round.  You will find it nearly impossible to twist the stitches at this stage — the extra tail is used to stitch up the 1/2 inch gap .

Begin Feather and Fan Lace pattern as shown above.  Knit in pattern for 8 inches, or preferred length.  If you just want a tube, after row 2 of the pattern, begin 4 rows of garter stitch.  If you hate knitting in garter stitch on circulars, use same technique as above.  Bind off loosely.

If you want a bit of a bib, or something to cover a bit more of your upper chest, try the following.  It’s the same pattern as the one used in the Placid Waters cowl.

Weave in ends, block and wear with pride.

As I was leaving the Lower Mainland Sheep Grower’s Association annual sale several years ago, a small bundle of fibre caught the eye of my youngest — who was about seven or eight at the time.  It was a small bundle, a 3.5lb lamb’s fleece from the Rambouillet breed. The development of the Rambouillet breed is a wonderful story for those who love history.  As found on the net, “The Rambouillet had its origin among the Moors of North Africa during the Fourteenth Century. Distant ancestors of today’s Rambouillet accompanied Moorish conquerors to Spain, and their descendants were left behind when the Spaniards drove the invaders out.”  The Rambouillet descends entirely from the Spanish Merino. In fact, it is the French version of the Merino developed when Louis XVI imported 386 Spanish Merinos in 1786 for his estate at Rambouillet.  To read more of the fascinating history of this breed and how the Spaniards gave up their monopoly of Merino sheep and inadvertently helped create/maintain the Rambouillet, visit here. 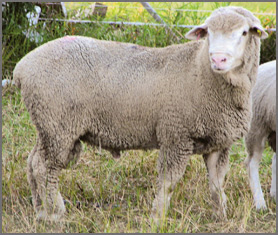 The fleece was soft with a 2.5 inch staple — and it was only 3.5lbs!  I had just purchased a 12lb Romney fleece and was feeling a bit overwhelmed.  But my daughter wanted this one.  Always the one to enable a budding fibre enthusiast, I bought it.  It washed up easily enough, but there was vegetation in it that I couldn’t seem to get out with washing and usual carding methods.  The dirt was mostly in the tips, but because the staple was so short [and because I didn’t know any better at that time] I didn’t consider cutting the tips.

So it just sat there, soft, dirty and un-spun.  Here’s a small clump of it. 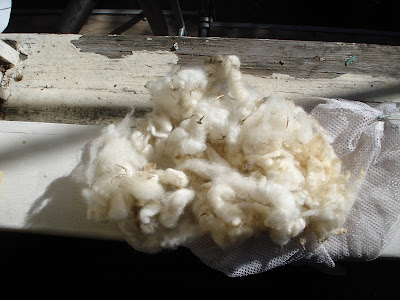 A while later I attended one of our guild “spin-ins” — a monthly gathering of spinners hosted at a member’s home.  At this spin-in I shared my frustration about this fleece and how I couldn’t seem to get the fine vegetation — turned out to be ground up alfalfa — out of the fibre.  A friend suggested I try using wool combs as a way to prepare it.  I had never used wool combs before, so we agreed to meet, me with my fibre and she with her combs and see if it could make a difference.

Wool combs are frightening looking things, even the Mini comb style.  They have two rows of long steel spikes that don’t bend.  The result was stunning.  So dramatic that the next day I ordered my own [locally made] set. 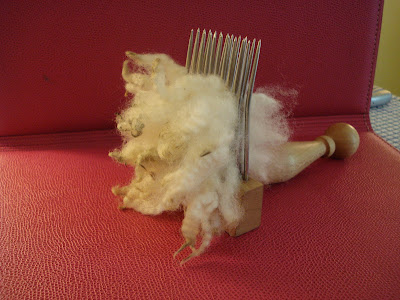 Here’s how you use wool combs for fibre preparation.  You load the fibre onto the combs by sorting out the staples.
Staple anatomy and definition:  a staple is a chunk of wool fibre.  There are two ends to the staple; the tip — usually dirty and sunburnt for it is the oldest piece of fibre and the butt end, the end that was cut.  This end often has a lot of lanolin in it because it was closest to the skin.
Load these onto your wool comb, tips out and butt end secured into the comb.  See above and below. 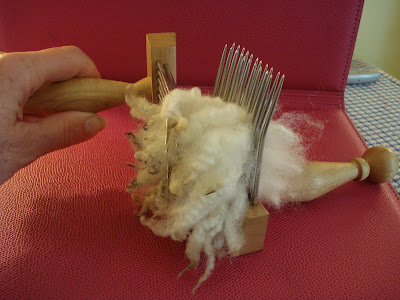 Then using a gentle stroke, you comb the fibres.  Each hand holds a comb — doesn’t look like it in the photo because the other hand is holding the camera.  The right hand comb spikes point upwards.  The left hand comb spikes face you.  Crazy but true.  As you make each a pass through the fibres, the right hand, which is facing upwards, moves in a more upward direction; and the left comb which is facing you, moves towards you and then curves to the left with a twist of your wrist.  These combined actions help to move the fibre from one wool comb to the next. 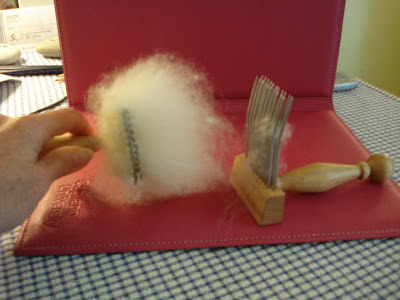 You comb, moving through the fibres until all the fibres from the right hand comb are onto the left one. 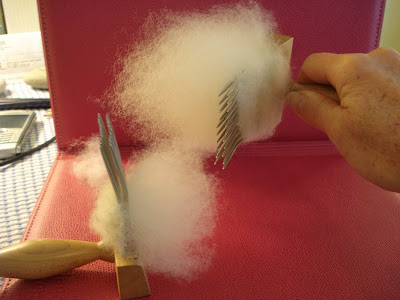 Then you do it all over again, moving/combing the fibres from left comb to the right one.  Not all the fibres will move over.  What will be left is the shorter fibres and lots of dirt and vegetation.  Magic. 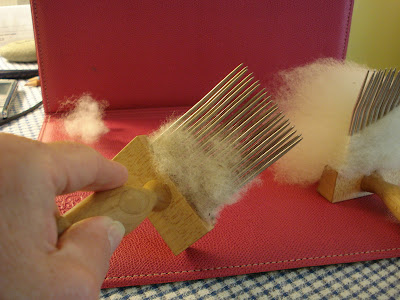 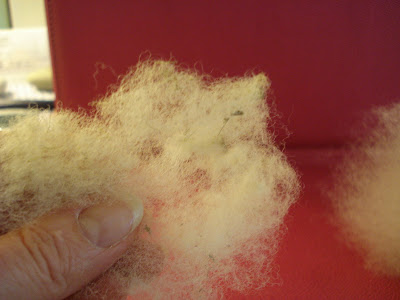 After a few passes, you will pull the combed top off the combs.  At this point, the fibres are pretty much all the same length. Gently stroke them out to a beard shape and start pulling.  Not too much; pull about half the length of the staple.  Then reach up and grab another section, and gently pull that again.  When you do this, your right hand will be holding the comb securely in place.  This is a gentle tug-o-war.  Tug too much and oops, you have a bundle of fibres in your hand.  Tug gently and steadily, moving up the fibre and you will have what is called a combed top.  A spinner’s dream to work with. 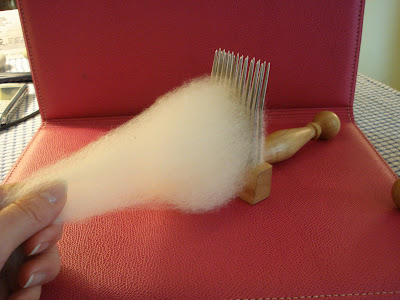 Here’s the family of Rambouillet I played with today.  On the left is the dirty, uncombed fibre.  Right top is the waste from combing.  This waste contains shorter fibres and all the vegetation that I couldn’t remove with my hand carders.  On the bottom right is the finished, clean and smooth, combed top of Rambouillet. 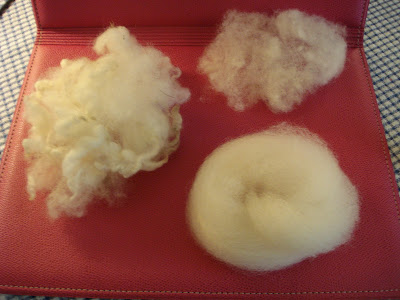 It may seem like a lot of work, and in some minor ways it is, but the result is amazingly soft and clean fibre that practically spins itself.  Additionally, it is a great work out for your arms, particularly your upper arms.  And who at this age isn’t concerned about that?﻿
Fiber Arts Bloggers