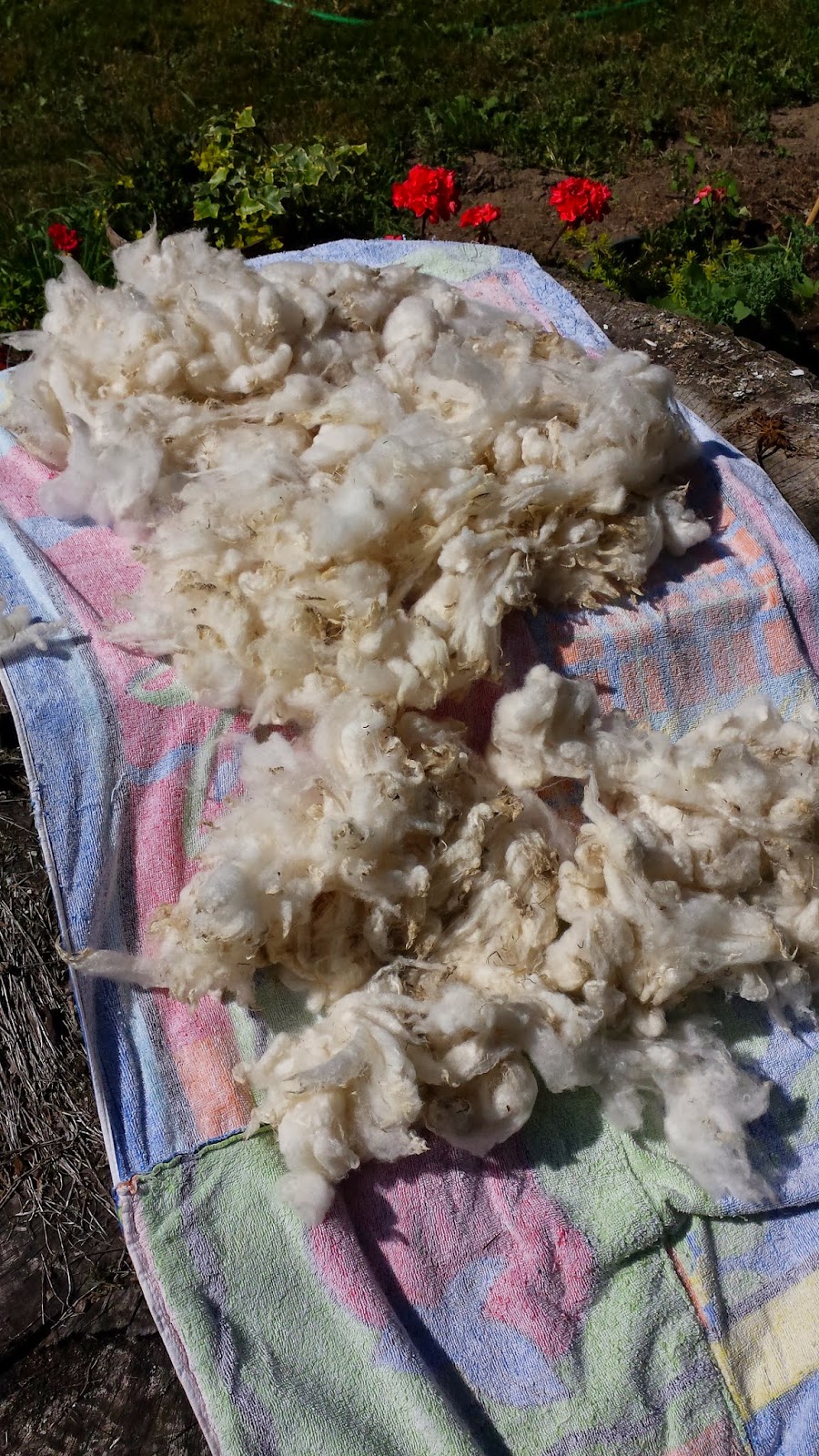 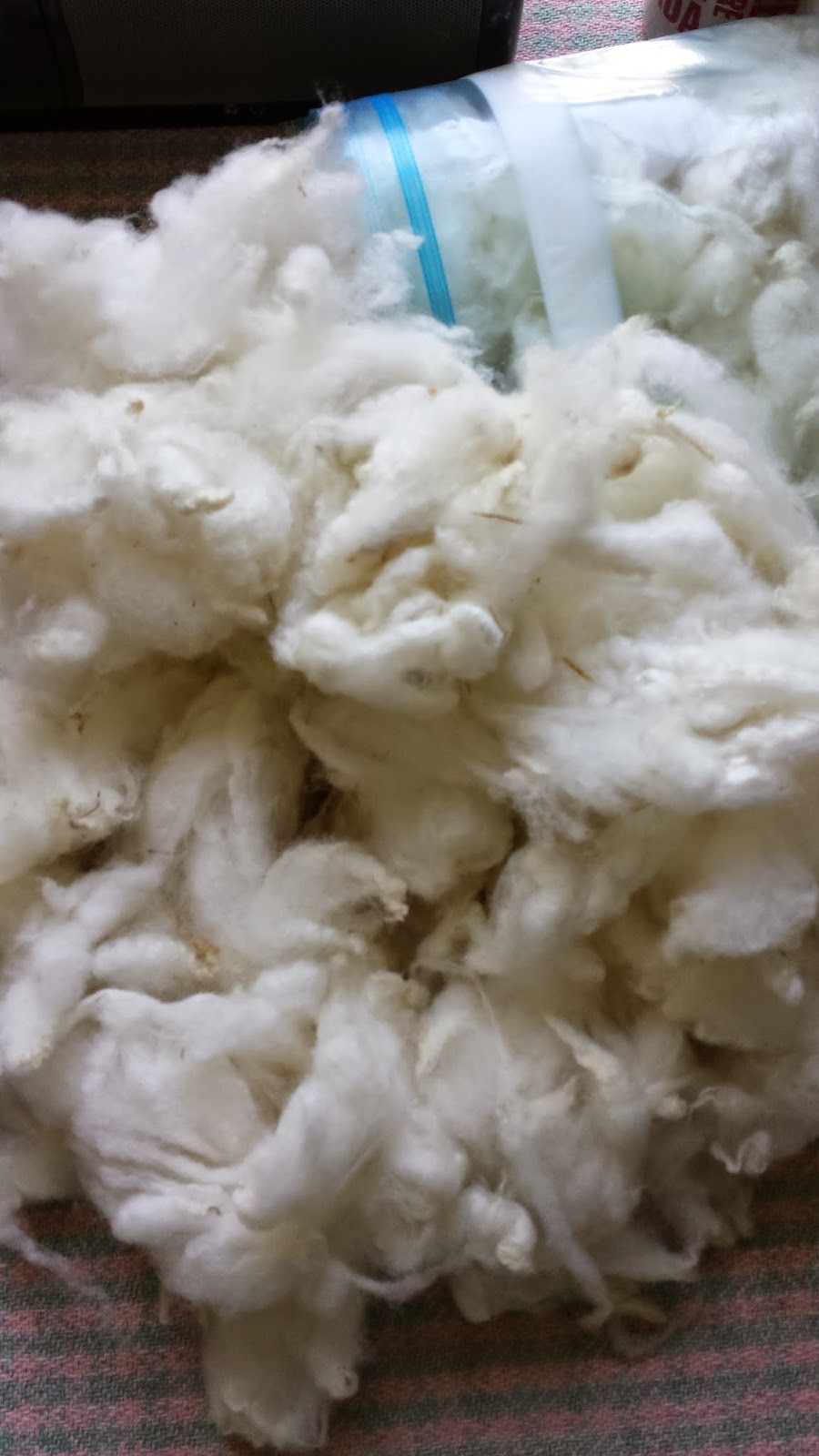 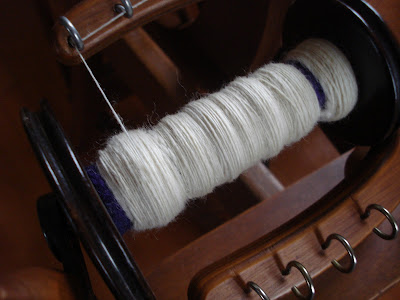 A couple of weeks ago I took some dirty fibre, put it into a lingerie bag and threw it into a bucket of ice cold rain water for over a week. The day I removed it I had to break the slim layer of ice that had formed around it. The water, while dirty at the beginning, was replenished daily from the deluges we’ve been having, so at the end, it was rather clean. I was going to leave it for several weeks, but it seemed so clean already, I got impatient with my own experiment.

So, I took the bag of fibre and tossed it onto the garden for the rest of the week. Over the week, as we had bouts of rain and sunshine, it got soaked and dried out repeatedly. A couple of days ago I retrieved it, towel dried it and put it by the stove to really dry.

I am absolutely amazed how clean this fibre is. There is no dirt in it at all, and only a trace amount of lanolin. Here is a photo of it. Bottom corner are the clean locks, at the top is a combed nest, and along the side is a hand carded rolag from the combed waste. 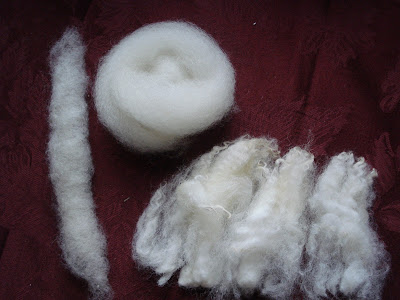 Here’s the whole lot of the experiment, combed up and waiting to be spun. It’s beautiful stuff — not damaged or affected at all by super hot water or harsh chemicals. 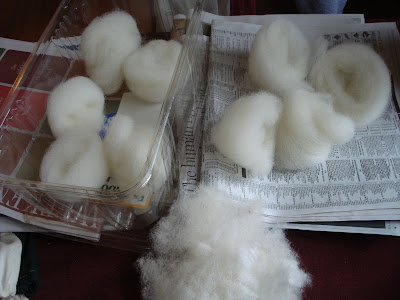 While it was easy to spin, the trick was keeping it warm.  When the fibre was cold, the lanolin was a bit sticky.  It’s generally chilly in this semi-insulated farmhouse, so I kept the fibre waiting to be spun, on the warming stove in our front room.

Here’s a double-ply skein which weighs 14.5g and is 58 m long. Pretty good sized sample to play around with I’d say.  Because the wool fibres are stretched so much during spinning and plying, it’s good practice to wash or at least wet the fibre after it’s been skeined.  This way it returns to it’s regular size and shape, reducing the risk of surprises the first time you wash a garment made with hand spun yarn.

I didn’t want to remove any of the lanolin from this yarn, so I’ve wet it again in rain water.  The stuff is ice cold, so I brought a bucket of it into the house, where it may at least get to room temperature in several hours.

Here’s my lovely skein soaking. I’ll let it do this for a few hours, to make sure the fibres get good and wet and then I’ll hang it to dry.

I can’t wait to knit this up and see what it’s like.  Imagine, this beautiful yarn from fibre made clean with rain water and time, plenty of time. 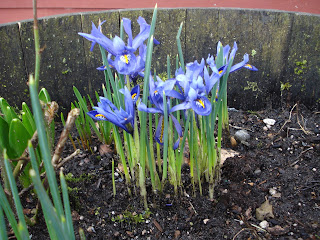 I told the story in an earlier blog post, about the woman who threw dirty fibre onto her garden to be used as mulch, because she thought it was beyond hope.  Only to rediscover it in the spring; white, clean and ready to be carded and spun.
Well it’s nearly spring here, as my lovely little flowers above can attest to, so I don’t have the long winter months to work with here.  But I do have the rains.  And boy is it raining.  So below is a bit of a photo essay of my experiment with letting the rain have its way — and cleaning my fibre in the process.﻿ 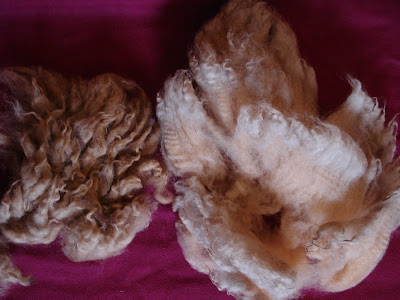 Above are the two samples I’m working with.  On the left is very dirty and greasy Jacob, on the right is Cheviot.  The cheviot isn’t as greasy as the jacob is.  But both have not yet been washed and both are local fleeces.﻿ 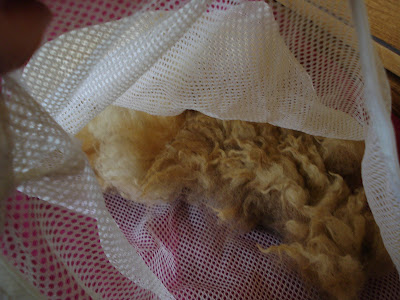 I tucked them into a lingerie bag, cause I don’t want to fight with sticks, straw and other unpleasant things when this experiment is over. 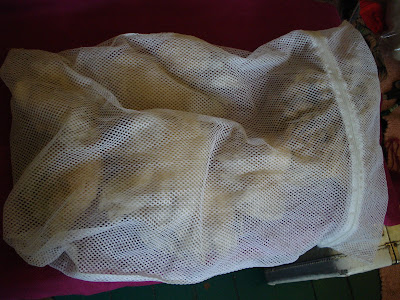 Nicely layered and zipped up.  Ready to head outside. 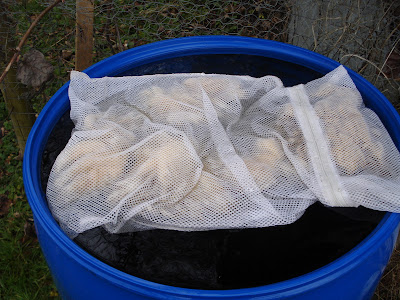 It rained all last night so the rain barrel was full.  You all know you can’t leave a full rain barrel hanging around, so it had to be tipped.  Before I did that, I gave the fibre a good soak in the lovely soft rain water. 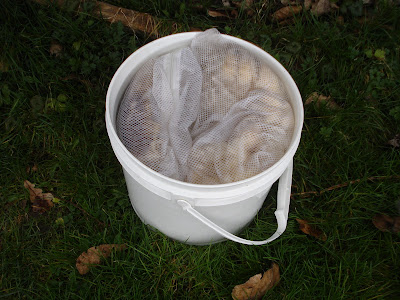 I decided that it needed a longer soak, so I put a bucket aside for the purpose.  Then tipped the barrel.  I’m going to let it soak overnight, or maybe over the weekend.  After that I’ll find a good spot in the garden for it. Somewhere it will get rained on, over and over and over again.
If this works, I’ll be one very happy woman.
Stay tuned.
Fiber Arts Bloggers